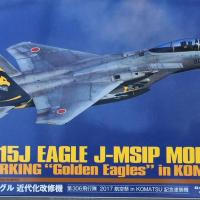 This is actually my second build and review of this kit (See review posted October 24th, 2015). This time around it’s the same great kit with some really striking markings. My research says Aircraft # 92-8906 was specially painted for an airshow that was cancelled due to a typhoon. You do get a second marking option without the cool artwork but I can’t imagine building this kit as such.

I’m not going to go into the history of the Eagle as it is well documented many other places. Unlike the first build where I used a nice photoetch set, this Eagle was built out of the box with the exception of some seat harnesses from the spares drawer.

Same great quality molds and parts fit. The intakes have some ejection marks to clean up but they are on flat surfaces easily corrected before assembly. The canopy is cast with a seam along the top that I took out with some sanding and a dip in Future. You’ll need to decide on the version you want beforehand as the parts used vary. One correction I noted, the instructions indicate the tips of the tails should both have rounded sensor ends (parts C29,H3, C28,H2) but the photograph of the real thing on the box shows the right (partsC28,C24) is pointed and the left is rounded. I didn’t catch that detail in time to correct it. Other than that, part joins fall in places not seen or are easily smoothed. The burner cans are little models in themselves and while tedious to construct, really look great when done. There are a few antennas cast into the fuselage halves that you will have to work around or cut off and reattach later.

The paint scheme is typical Light Ghost Grey with Dark Ghost Grey spots on top side. I used Russian interior green for the refueling port door and masked and sprayed the metallic vents. The decal sheet is extensive and includes not only the spectacular special markings but numerous stencils that are all legible. The trickiest decals were the full size vertical stabilizer artwork. Cartograph produced the decal sheet so you know they come off the sheet easily and allow working time once on the model. A little Solvaset literally melted them into the surface. The landing gear, like the rest of this kit is very detailed and tiny. I built this aircraft without any ordinance or fuel tanks but you get a full complement of missiles and drop tanks if you want them.

Even without the photoetch details this is a great little kit. I would recommend it to more experienced modelers given the volume of very small parts. This build was every bit as fun as the first time. I highly recommended it to all the Eagle fans out there. Thank you IPMS for the opportunity to build this kit again and to Platz for the sample of this fantastic product.