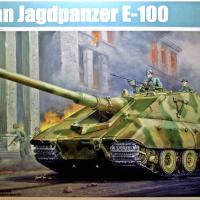 The next step in the evolution in German tank designs may have included the “E-series” ordered by the Waffenamt as a parallel development to the Porsche Maus in June of 1943; these new super tanks would have been based on the E-100. Our model, the Jagdpanzer E-100 prototype, was being developed as the next generation tank destroyer. Henchel produced these prototypes around the city of Paderborn. However, after 1944 work continued at a slow pace and was finally canceled in favor of the Maus. The first prototype was never completed and was found by the allies on the factory floor in 1945. Secured by the British Army, the E-100 was evaluated and scrapped.

The build is simple and straightforward. I encountered no problems in fit or construction. The parts are flash free, with fine details and the surface texture is reasonable. Following the instruction sheet to the letter quickly left me with a completed model ready for painting in just a few short hours. I did use a little putty to clean up a few seams on the upper hull. The photo etch parts were easy to trim and fit perfectly.

I wholeheartedly recommend this kit. It’s an extra large, big, bad killing machine and makes for an impressive model. This piece will dwarf most of your other 1/35-scale collection. The only down side is the hollowed back sides of the suspension coils that are revealed when you look at the bottom side of the tank, not a big deal in the big picture. Some may not like the large rubber tracks.

Thank you Trumpeter and thank you IPMS.