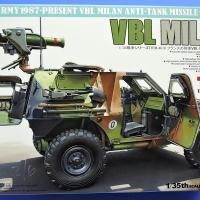 The Panhard VBL is a French light armored reconnaissance vehicle developed by the Panhard company with a steel-armored body and bulletproof glass. The VBL can also run on water with a propeller which is part of the rear axle. This version of the VBL includes a roof mounted Milan Anti-Tank Missile Launcher. This kit is a reissue of Tiger Model's kit of the Panhard VBL light armored reconnaissance vehicle with 7.62 mm machine gun, #4603. Tiger has also produced a version with a 12.7 mm M2 machine gun, #4619.

All six of the kit’s vehicle hatches can be modeled open or closed. The kit includes a complete interior with weapons, gear, and communication equipment. The tires can rotate. The kit also includes a metal tow cable and missile launcher with six spare missiles. The roof mounted missile launcher can rotate. The kit does not include an engine or transmission. A roof-mounted machine gun is provided with the kit parts, but not used on this version.

The kit comes on seven light tan plastic sprues, bagged individually or in pairs. The body upper and lower halves are bagged separately. Two bags of four tires are included for a total of eight tires. Another bag includes the decals, clear plastic parts, woven steel cable, and a small photoetch fret. The Tiger Model decals are very sharp, in register, and the decal film edge is close to the printed image. The decals are very thin so care must be used applying to avoid folding them under. The plastic parts have nice crisp detail, but with mold seems on most parts. Some of the parts have misaligned mold edges. The ejection pin marks are well-concealed within the model.

The first four steps assemble the interior. The part fit is good, but I had to use some clamps to get the dashboard to fit tightly to the interior tub. Step three shows holes being drilled in the underside of the interior tub, but the arrows point to the wrong hole. The holes to be drilled are the two just to the left of the arrows. This will allow installation of the case in step number four. The painting guide shows the internal colors of the vehicle in a cutaway, and there are also many images online of the interior of the vehicle to aid in painting.

Step four shows the passenger side seat installed in the vehicle but it is not called out in the instructions. Step five shows the installation of the spare missiles and other items on the inside of the upper hull. The part labeled A24 which looks like in air-conditioning unit is actually part A29. Decals are provided for the spare missile tubes which add nice detail. The interior is nicely detailed.

Steps six through nine install the front and rear suspension parts, which go together very well. In step nine I didn't install the taillight lenses until later after the vehicle was painted.

Step 10 prepares the passenger side door for installation. Part B21 should only be used if the door is open as it will conflict with the dash in the closed position. Gear is shown installed on the door including a rucksack, Famas assault rifle, and ammo clips. I held off installing the gear until the vehicle is painted. The door is installed in step 11 and fits very well. The rear door is assembled in step 12 and the driver side door in step 14, both with stowed gear inside and out. The doors can be posed open or closed so I left the driver and rear doors open to view the interior.

The kit has two options for wheels and tires. The first is a lighter duty tire with a five-lug wheel. The other option is a tire with a more aggressive tread pattern, lower profile, and heavier duty wheel. Both of the tires are very nicely molded in soft TPE rubber with crisp lettering detail on the side walls. The lighter duty tire has a very slight center seam, but the heavier tread tire has no center seam visible. The instructions don’t say to not use glue on parts B12 in step 11, but not gluing them will allow the finished wheels to turn.

Tiger Model includes a nice little photoetch jerry can holder for the vehicle. The photoetch is fairly stiff so it holds its shape well. Although I chose to solder the joints, super glue would work well also.

The marking guide and decal placement guide is on a separate colored sheet showing views of all sides of the vehicle plus a cutaway of the interior. Colors are called out both in A.MIG and Tamiya names & numbers.

This is a nice kit that assembles without much difficulty into a good looking model of the Milan VBL light armored vehicle. Anyone with even a moderate amount of modeling experience will enjoy building this kit. The parts have nice detail and the fit of the parts is very good. Some cleanup of mold seams is required. I enjoyed the build and look forward to more Tiger Model kits!

Thanks to Tiger Model for producing this nice kit and providing the review sample to IPMS.​

Base chassis being assembled

Interior assembly with underside of roof

VBL Milan in Afghanistan 2008
Previous Next