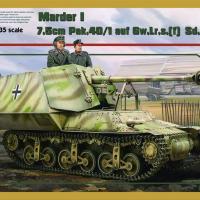 Panda Hobby, a relatively new manufacturer based in China, has recently released a very interesting addition to the German self-propelled Marder family in 1/35th scale; the Sd.Kfz. 135 Marder I. The diminutive French chassis sports individual-link track, a single–piece barrel, and a nicely-detailed ammunition rack to help kick-start the interior.

The Marder or “Marten” was the name given to a variety of German World War II tank destroyers which used existing, high-use or outdated chassis coupled with proven and lethal anti-tank guns. Due to the weight and space constraints of the smaller chassis, the Marder series were not fully armored and were not considered proper Panzerjäger that could exchange fire with enemy tanks. Thin upper armor on the front and sides offered protection against shrapnel and small arms only. Accordingly, these vehicles operated best when used in ambush situations or from prepared defensive positions. All Marder series had open tops, although some were issued with canvas covers to protect the crew from the elements.

The subject of this review, the Marder I, incorporated the German 7.5cm anti-tank gun and the Tracteur Blindé 37L (Lorraine), a French artillery tractor/armored personnel carrier of which the Germans had acquired more than three hundred after the Fall of France in 1940. Between July and August of 1942, 170 Marder I's were built on the Lorraine chassis and later made up a significant component of the armored fighting vehicles of the reformed 21st Panzer Division in Normandy.

The front cover of the instruction booklet reproduces the box art in color, but otherwise the instructions utilize sharp, black and white CAD images to walk the builder through the 12-step assembly. Unfortunately, all of the drawings are oriented from the upper left-front and upper right-rear points of view, leaving the parts placement and proper angles of some of the parts up to the builder.

Other than that minor annoyance, the flow of assembly is well documented and I had no problems at all during the build.

Panda Hobby thoughtfully includes a full-color, double-sided insert that covers the decal placement and five different paint schemes, although none are identified.

The instructions come with specific paint call-outs for Gunze Sangyo Mr. Color only.

Assembly sequence varies by modeler but the general flow of things go pretty much as Panda intended. The exceptions I made are identified in the text, below.

Things to Consider Before Starting

As an open-topped AFV, the build-it-all-and-then-paint-it approach won’t work very well here. The interior will have to be finished as you go, and before you drop in the main gun. Once the gun is in place, there are bits to be added over and around it, so those bits will have to be finished separately as well. In other words, the assembly process more resembles that of an airplane than a tank.

While Panda includes a very nicely detailed ammunition rack, very little else for the interior comes in the kit. I added boxes and bags from my spare parts bin to ‘busy’ the space up. The fenders of the Marder I are very tight against the track so you will need to attach the track as instructed, right after assembling the lower hull.

Construction begins with the lower hull and suspension. The multi-part lower hull comes together well and fits perfectly. I left four tiny photo-etch parts off the front transmission cover after losing two of them into hyperspace. Panda chose to mold the entire sides of the bogies as two long, single pieces that you simply sandwich around the six wheels in-between – simple and brilliant. The alignment of the wheels is something you’ll want to watch as your glue dries.

The individual track links come on two sprues, have three attachment points each and are not sided. Panda says to use 107 links per side, which is what I used without a problem. Don’t lose any links – you only get two spares in the box.

A track ‘assembly jig’ comes in the kit, but I’ve never figured out how to use these without gluing the links to the jig, so I just used Wonder Tape and assembled them, link by link, into two runs which I then applied glue to. I used two drops of Testor’s black bottle cement per link to bring each entire run together as one piece. After drying for 45 minutes, each run could easily be lifted up and draped over the wheels and attached with glue. Done and done.

Step 4 starts the main deck. A tiny, multi-part PE ladder is attached to the front of the hull – a masterpiece that I subsequently (accidentally) smashed and had to discard. I suggest that you add this delicate assembly waaaay later in the build.

After the main deck drops onto the lower hull, the cool little ammunition rack is installed. Since Panda allows full access to the rack throughout the build, I left the 18 shells out so I could finish them separately. They are a tight fit, but will slip in with a little effort after painting.

Continuing with the main deck in Step 6, Panda adds a variety of panels to the forward superstructure that look fiddley but fit perfectly. I formed and attached the PE muffler cover before attaching the two to the outer hull side. Heating the PE cover with flame beforehand allowed it to be easily rolled using a UMM PE tool made for the purpose.

The six-part barrel travel lock is shown only in the ‘transport’ configuration, but the parts included in the assembly can be built in the stowed position, if desired. I skipped to the final step here to attach the antenna wiring run since it would be painted with the interior.

Before stopping after Step 8 to paint the interior (see Painting section, below, for specifics), I filled the crew space with accoutrement from my spare parts box. Just about every photo I’ve seen of the Marder interior is crammed with various personal effects and stowage paraphernalia, and while Panda supplies an ammunition rack and a small radio box, nothing else comes in the kit for this highly visible area.

It’s amazing how many different designs of the venerable German 75mm AT Gun model manufacturers have come up with, and Panda doesn’t disappoint with theirs. While similar, the parts are slightly different from what I’ve built before, they fit perfectly, and render the ubiquitous AT weapon beautifully. I really like the plastic, one-piece, slide-molded barrel, complete with a double-baffled muzzle brake. Don’t sweat the exact placement and fit of the inner shield (Part B5) – it is all but invisible after being covered by the exterior frontal armor.

The final step of the build brings the three-part main gun shield into place. I really liked the way this was designed and engineered – the fit is perfect and the two sides are positionable, making slight adjustments easy to accomplish.

I was pleasantly surprised with the five schemes provided by Panda for this relatively rare vehicle; I ended up choosing the only one with a four-view go-by, a ‘tiger stripe’, grey on grey. The Marder I was finished using Vallejo acrylics, which I thin 50/50 with their own thinner, and a few drops of Liquitex Flow-Aid to assist in preventing clogging the tip of my Pasche-H Single-Action airbrush, Number #3 tip, set at 20 lbs. pressure.

I started by applying a coat of (rattlecan) Krylon Flat Black Lacquer Paint/Primer for my dark, primer/pre-shade coat. Surprisingly, this low-cost solution sprays on easily and dries very thin and level – replacing a time-intensive task I normally use an airbrush and more expensive paint for. I use a dark primer coat to give the plastic and PE some grip, and to fill in the recesses - creating a shadow effect near the flat surface edges, and adding depth for the subsequent coats to come. I always let lacquer paint sit overnight in the garage to de-gas.

I used AK Interactive Track Wash for the track and Mig Dark Wash heavily thinned (10:2) with Mona Lisa for an overall pin-wash, which I find to flow perfectly over the hard-gloss finish. I added a little bling using Gamblin Silver oil paint on the tracks, and Uschi Chrome polishing powder here and there using an Artists blender.

Next I airbrushed Vallejo Light Brown along the bottom of the vehicle and trailer to simulate road dust, and shot a little Vallejo Matt Varnish on any remaining shiny spots.

Finally, I added a mix of Mig Black and Brown pigments to the running gear and track, and the rear of the vehicle. Off to the photo-booth for this little guy!

As my first Panda Hobby build, I wasn’t sure how it would go – the track and running gear for the Hotchkiss chassis is very small and delicate, the 7.5cm gun could be complicated, the visible interior – who knows? My fears were without merit, however, as Panda solidly delivers on all counts. The parts fit is perfect; the engineering and design of the one-piece bogies, slide-molded barrel, and adjustable (plastic) gun-shield was spot-on, with a focus on buildability.

Just one nit to pick – the inclusion of more interior detail (in the form of boxes and crew paraphernalia) would have been nice.

That said, this was a fun little project, and I highly recommend the Panda Hobby Marder I to modelers of all skill levels.

I would like to thank Panda Hobby for providing this kit for review, and to IPMS USA for giving me the opportunity to build it.