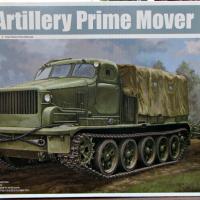 Joining Trumpeter’s growing fleet of prime movers, this kit is their latest addition. The AT-T is a tracked vehicle, sharing the same components as a T-54. The kit and markings are for one vehicle. The color call out sheet shows this as a parade vehicle, white rims and markings of the Soviet flag. I chose to make it a grubbier vehicle with the Soviet red star (ironically enough, left over from another Trumpeter kit). Molded in the now customary grey Trumpeter plastic, there are ten sprues in the kit of which three are the tracks and two are the rubber road wheels. It includes one fret of PE, clear parts and one sheet of decals. The parts are nicely molded, but there are some prominent mold lines on some of the smaller parts that must be taken care of.

Construction begins with the engine and drive train. Since the radiator grill of the cab is open, you can see the engine. Trumpeter did not skimp on the detail and the engine is a kit in itself. Since the engine flaps cannot be opened on the cab (at least without some surgery), you really don’t need to super detail the engine. The instructions are clear and the engine and drive train went together without a problem. Similarly, the lower hull also went together quickly. There’s a little bit of play in the idler arms, but nothing that is out of the ordinary. The road wheels include a separate rubber wheel that must be assembled before the wheels are glued together. The attachment points for the two wheels were not very robust, so it took some time to make sure that they were glued together appropriately. The tracks are individual links. They are not separated from the sprue, so it takes some time to clip them, clean/sand them, and glue the individual links. In spite of the time, I think they look pretty good. I gave them a bit of sag. I am not sure how much sag is appropriate, but it looks more dynamic than a straight line of track links. Once the lower half of the vehicle is assembled, it is time to move the upper half of the vehicle.

The cab and bed of the AT-T are fairly straight forward to assemble. The bed of the vehicle is well molded and easy to assemble. The stakes that hold up the wooden sides of the bed (part E4) a little tricky to assemble, but not too bad. The lower half of the stake bed requires a little bit of PE. Given the abilities of molding plastic these days, I really don’t know why Trumpeter chose to do this (I am not a fan of PE) but so be it. The interior of the cab went together without a problem. Looks nice when assembled. The doors for the cab, however, proved to be the biggest challenge of this kit. Each door was assembled correctly but they refused to fit correctly. They would not lay flat against the cab. I sanded and trimmed and they refused to fit which is why I chose to show them open. I am not sure if it is an engineering issue, but it seems that Trumpeter needs to do a better job of making sure the plastic fits. The rest of the bed and cab goes together pretty quickly. As stated previously, I am not a big fan of photoetch. The headlight supports and the locking arms for the hood are photoetch. I think that those could have done in plastic without a problem.

I gave the vehicle a shadow coat of Tamyia’s NATO Black (XF-69) followed with a coat of Vallejo 70.894, Camouflage Olive Green. A gave the kit a mist of Future to put on the Soviet stars followed by a dull coat. Trumpeter has made a name for itself with very esoteric kit selections. They have chosen to kit several prime movers and this, by far, is my favorite, in spite of the challenges of the kit. There is just some quality of this vehicle that piques my curiosity. My thanks to IPMS, Megahobby, and Trumpeter for giving me the opportunity to review this kit.