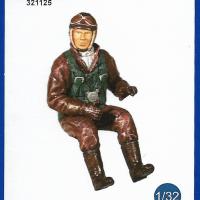 PJ Production is a Belgian company that is self-described as a company who specializes in the creation and production of resin scale models and accessories aimed at amateurs of military aircraft kits and aviation-related dioramas in 1/72nd, 1/48th and 1/32nd scale.

This is my second PJ Production product and overall, I found it to be a very nice resin figure. The figure represents a seated IJN pilot ready to be posed in the cockpit of your favorite IJN fighter. The photo of the box of the pilot figure is also used to aid your painting the figure. The figure is molded in a light grey and has very fine detail although I did find several pinholes in the resin. As most of them were on the pilot’s aft side and would be hidden once seated in his office chair I left them be. Like my other PJ Production review I did find late in the game that one of my pilots’ thumb tips was missing due to a small air bubble. Had I decided to fill the pinholes, I would have used my favorite resin filler made by Bondo. It is a very fine two-part glazing and spot putty that dries lightning quick and sands very well. (Bondo #801). The figure fit together very well and due to the simple construction of the figure I just used some CA glue to attach the arms after everything was painted.

The IJN Pilot figure will make a fine addition to any Japanese aircraft. My thanks to PJ Production and IPMS USA for allowing me to review this product.