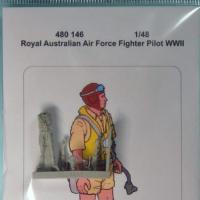 Aires Hobby Models provides a variety of high quality resin products to upgrade, or correct, a variety of models in the most popular scales. They also have a line of crew and pilot figures in 1/72nd, 1/48th and 1/32nd scale. These figures are relatively inexpensive, and make a nice addition to an aircraft diorama, or to add a better since of scale to a finished model.

Aerobonus continues their series of pilot figures. This release is a 1/48th version of Royal Australian Air Force Fighter pilot. The figure is posed standing wearing his flight gear, which includes khaki shorts, headgear, lifejacket, and his parachute. In addition, the pilot comes with the addition of being able to hold his oxygen hose and mask in his right hand, further enhancing the pose.

The resin figure comes in five nicely cast pieces, with the arms, head, and body each molded separately on the pour stub. The pilot is shown wearing shorts and a short-sleeved khaki uniform common in the tropical climates. His equipment, and parachute harness are nicely detailed, and the facial features are well done as well.

The painting instructions are typical for Aerobonus with a simple color drawing of the figure. Assembly is a breeze with very little clean up, aside from removing the extra resin between the figure’s legs. A word of caution when removing the air mask and hose from the resin base, it is extremely thin, and I broke mine into two pieces during the removal and clean up. I painted my figure using Vallejo paints, and had no issues with the paint adhering to the resin.

I’d recommend this to anyone wanting to add a better sense of scale to their model and it will make a nice addition to any RAAF model.

Thanks to Aires and IPMS/USA for providing the figure for review.

Resin parts on pour stub back side