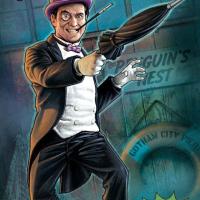 Well, Batman fans, I’ve been a very lucky fellow indeed. The Penguin represents my fourth foray into this particular Moebius Models figure range, and what a kit it is!

Once again, the engineers at Moebius have bent over backward to make this large-scale figure as easy to paint as possible, with each area separated by assembly. The kit comes molded in white, which is the color of the Penguin’s vest, gloves and spats, and seems an appropriate choice for easy coverage. It also includes a clear plastic monocle and a rod for the umbrella, although in my instance these two latter items were missing from my sample. Moebius has kindly sent replacements, but in all honesty these were easy to scratch and I didn’t want to wait for the mailman to finish this charmer.

The kit comes with the option of an open or closed umbrella, and although both were nicely done, I thought the open umbrella would tend to obscure the finished figure too much, so opted for the closed version. What struck me first and foremost about this kit upon opening it was the incredible rendition of the face. Moebius Models has truly captured Burgess Meredith in all his maniacal glory as the Penguin. I must confess I assembled his head and painted it before doing anything else, just to enjoy the process of bringing him to life.

Having just completed the complex paintwork on Robin, painting the Penguin proved to be a relative snap. Basically, he’s only two colors – black and white. The one flaw in the painting guide as well as the cover illustration is that his hat and bow tie are NOT dayglow pink. A quick peruse through the internet will show these items of apparel to be distinctly lavender in shade – a small but significant point, as these are the only really bright spots on the figure as a whole.

Assembly proved to be very straightforward, with just a bit of filling around the inside of the legs and at the shoulders where the arms connect. It’s best to paint the vest separately and then assemble the torso with pre-painted lapels to hold it in place. There will be some filling at the joints for these lapels, but pre-painting these items obviates the necessity for elaborate masking.

The only modification I made to the kit (besides replacing the missing monocle with a punched piece of clear plastic) was to hollow out the end of the umbrella and endow it with a little “sleep gas” – one of the Penguin’s favorite weapons. I’ll be replacing the temporary monocle with the kit version as soon as it arrives in the mail, but for the meantime I think he looks terrific, with that maniacal expression, cigarette holder flamboyantly cocked, and that aggressive pose. I really believe Moebius Models has hit it out of the ballpark with this one. I can’t wait to see The Joker, the Riddler and Batgirl.

Opposite side view of Penguin

Rear view of the dastardly Penguin executing his cunning plan

Closeup of the face, bowtie, and tuxedo

Closeup of the right side of the nefarious Penguin's face, teeth clenching his cigarette holder