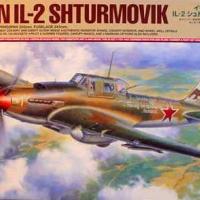 The Soviet Union’s first purpose-designed ground support aircraft, proposed in 1938, the Il-2 first saw production and combat action in 1941 as a single-seat platform. As a result of heavy losses from enemy fighters, the 2-seat version with a rear gunner station was fielded in 1943, and proved to be a crucial element in the Red Army’s defeat of the invading Nazi forces. With over 36,000 units produced, the Shturmovik was and still is the most-produced aircraft in aviation history, and accounted for nearly 1/3 of all Soviet aircraft produced during “The Great Patriotic War.”

Tamiya’s rendition of this indispensable element of the Red Army’s air arm is a truly fine piece of design and production excellence, as is expected from Tamiya. The pre-production sample received for review was essentially flawless. Kit contents include 6 trees of crisply and delicately molded parts (5 light gray, 1 clear), 2 sheets of decals with markings for 3 aircraft, and a polycap for the propeller. The sample kit, being pre-production in this case, included draft instructions which had not yet been populated with the color chart or painting callouts throughout. Special thanks to my clubmates from IPMS/Wright Field Scale Modelers and a buddy from IPMS/Eddie Rickenbacker for filling in the color reference gaps.

Pure fun! What more is there to say? This is a classic “shake the box and out comes a beauty” Tamiya production. Fit and alignment was essentially flawless throughout.

The cockpit and rear gunner station are nicely detailed, and the decals for the cockpit instrument panels and side consoles settled down perfectly, providing a very convincing effect. The Tamiya-standard seat harness provides suitable visual effect at arm’s-length for an out-of-box build.

The fuselage, wings, and stabilizers went together with the need for very little putty – just a spot here and there where I cleaned up the sprue attach points a bit too aggressively. Some radiator detail is provided, but is not visible once the model is buttoned-up, but the crisp landing gear and wheel well detail is notable when viewing the underside. Canopy options are provided for open or closed, and the parts are crystal-clear and thin, and a printed sheet of masks is provided and very welcome for the framed canopy.

Ordnance is simple and straight-forward – a pair each of 250kg and 100kg bombs and 4 rockets complimenting the 23mm wing-mounted cannon and the 12.7mm rear gun.

The preproduction decals were thinner than traditional Tamiya decals and were beautifully printed with crisp colors and registration, but did require careful cutting around the edges to eliminate excess carrier film (I would assume the production decals will not require such care). They settled down nicely using the MicroScale system.

Once decals were sealed with an acrylic clear, the delicate recessed panel lines readily accepted an oil wash, which was sealed with a flat acrylic clear, and followed up with some pastel dry-brushed engine exhaust residue and foot traffic wear around the boarding area.

Tamiya’s Il-2 is a winner! It is a delight to assemble, and modelers of all skill levels should find it an enjoyable build. Although I’m not a huge fan of “non-Anglo” aircraft, this new Shturmovik has quickly become one of the favorites in my collection.

I highly recommend this kit for modelers of all skill levels and interest areas. If you want to build a beautifully engineered and produced aircraft kit with visual appeal and little stress, this one certainly fills the bill.

Thanks to Tamiya USA and IPMS/USA for the sample kit and one of the most enjoyable 1/48 scale aircraft builds I’ve had in a while!

Instrument and side panel detail