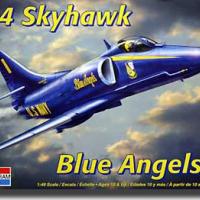 A product of the brilliant yet practical designer Ed Heinemann, the Skyhawk was a simple lightweight naval attack jet that served the U.S. Navy and Marines far beyond what anyone expected. One of its standout roles was serving as the mount of the U.S Navy’s Blue Angels aerobatic team from 1974 to 1986. These Naval ambassadors dazzled hundreds of thousands of people with their precision maneuvers, which the A-4, with its phenomenal roll rate, was capable of doing. I had the opportunity to witness these aircraft in action at the Pt. Mugu NAS in my teens. I was looking forward to sharing a shiny blue and gold bird with you until I saw the decal sheet. This is the original Monogram kit we all know which, in spite of its raised panel lines, still holds up against its contemporaries. There are decals for the Blue Angel birds 1 thru 4 but the other option is that of Senator John S. McCain’s A-4E as it looked in June 1967 when he was assigned to the Klansmen of VA-45. This is not the aircraft he was shot down in but the one in which he almost lost his life on July 29 aboard the USS Forrestal when a Zuni rocket accidentally fired from an F-4 on deck hit this aircraft. McCain managed to get out of the burning jet and was injured by shrapnel from an exploding bomb caused by the subsequent fires. He survived that incident (134 others did not) and returned to action aboard the USS Oriskany until he was shot down on October 26, 1967. I could not resist building a tribute to an American hero, so to those looking for Navy Blue, I apologize.

This kit has been around for a while so I’ll skip the parts breakdown and get to the build. The Skyhawk is a very small machine which makes for a very tight cockpit. There are decals for the main panel and side panels that look fine in place. Since I used the pilot figure, not much else was needed to in terms of dressing up the seat. I glued the intakes on and painted the inside white before I put the fuselage halves together. Be careful! Monogram chose to mold the antennas on the halves and it takes a bit of care not to break them off during the build. I put a lot of weight in the nose so I wouldn’t have to use the clear peg provided for a tail prop. A little body work was needed at the bottom wing-fuselage joint. I opened up the vent on the fuselage top and boxed it with sheet plastic so I wouldn’t have to try to fix the seam in the recess. The canopy masking is complicated by the faint framing detail. This is the only place the mold is showing its age.

Gloss white and light gull grey was the scheme used on early Skyhawks. There are insignia-red areas including the intake lips, inside of flaps and slats. I mixed a color close to the decal sheet red and sprayed these areas. After masking those areas the entire plane was painted with a Tamiya semi-gloss white rattle can. After masking the white, the top was painted with Model Master light gull grey. I used a coat of Future applied by airbrush to level the surface for decals.

I used to dread Monogram decals because they came off the sheet with a milky glue residue and silvered despite my efforts. I’m happy to report the decals in this and my last Monogram kit (see Kurtis Kraft racer review) worked quite well. The only issue I had was getting them to lay down over the wing top airflow vanes. That’s a tough spot for any decal to conform over. Once decaled I stuck on the details and you can see the result.

Overall this kit is still relevant compared to other A-4 offerings. If you want to build an accurate Blue Angels bird you’ll have to remove all the bumps and humps and scratch build a smoke generator housing for under the tail. Also those aircraft were fitted with a cranked refueling probe (as shown in the box art) but not part of the kit. This is an intermediate level kit but a beginner could handle it with a little help. On a scale of 1-10 I give this an 8. Thank you to Revell/Monogram and IPMS for allowing me this trip down memory lane.

Finished A-4, bottom view
Previous Next