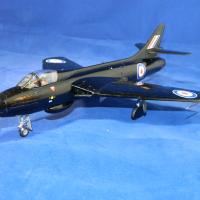 Extreme gratitude from IPMS USA and this reviewer to Hobbico for providing us this kit… it’s been a while off the radar and we’re pleased it’s back!

This kit was originally released around 1997 or so, if I remember correctly. At the time it was (and still is) the best of the 1/48 kits of this famous British fighter, and was considered to be the “UK Sabre” of its day with maneuverability, speed, and overall “it looks right” appearance.

This kit continues Italeri’s current trend of releasing warfighting aircraft with specialized color schemes. In the box you get the Hunter F.6 and FGA.9, with two different lower nose cannon covers, and the different size/shape exhaust area required for each version based on the engine installation. The F-6 was designed as an air-to- air fighter, whereas the FGA.9 incorporated ground attack capabilities with rockets and bomb delivery capability.

The kit parts have not been modified since their early release; the plastic moldings are flash-free, the clear parts are high quality and have excellent clarity, and the detail is excellent in some areas (the landing gear/wheel wells and surface details overall are better than some other company new releases), but the kit retains the Spartan cockpit and almost 1/65 ejection seat. It looks like a seat, but is too small, Instruments are not included, and most modelers pick up one of several aftermarket availabilities including the now-defunct but carried by Squadron version, and some other European brands. The main wheels and tires are detailed and the correct size, but the nose wheel is still too small in profile. Again, some older companies have replacements, but it’s been 20 years…

Assembly is swift and accurate, although you have to take your time on the intakes as they are a bit fiddly and (for the fastidious among us) not so great in fit. The wings however slide into place without fuss, and the whole model can be assembled in a couple of hours if you are going the quick route without aftermarket. Light sanding stick work is required for the fuselage seams.

The landing gear is complicated with very small actuating arms, but they are extremely accurate. The only real difficulty I had was the torque links, but I persuaded them to fit.

Two types of landing flaps can be displayed deployed; they both have different cutout sections to clear the fuel tanks.

The gear CAN be assembled in the up position, but It is up to the modeler to figure out how to close the doors. There also is no crew-member for the kit.

On some of the marking options one may want to leave the stabilizers and other “sticky-outy” bits off until after masking removal… the kit was a very easy to paint but I got a lot of dust in my gloss black and silver details.

The wings were next, and these were uncomplicated with detailed wheel wells and oil coolers. The engines are then offered up to the nacelles, and if you are careful, will fit relatively well. The cowlings are multiple part items, but everything keys in where they are supposed to. Do NOT install the wings to the fuselage yet, as they are press fit and it’s easier to add toward the end of the build, due to their design. They fit perfectly with NO putty required.

The canopy was a simple addition and only requiring masking.

I closed the side waist doors/windows, as the cold weather over the North Sea tended to cause crews to keep the windows closed unless necessary. Blue bunny heated suits aside, I’ve flown in more modern aircraft with the side windows open (CH-53’s in Germany) and in the winter the wind blast is brutal at 100 knots, and I didn’t have a heated suit. Those guys were tough… and lost a lot of fingers and toes to frostbite.

The overall gloss black sprayed after masking the canopy, with Duplicolor gloss black touch-up car paint rattle cans, and allowed to cure another day. I of course dropped the model in a grassy spot just outside my back door while spraying the thing, so that required a bit of work to Re-do. Grrrrrr.

Remove the clear area masks, touch up, and glosscoat.

Decaling was about 15 minutes of work, as no stencils except ejection triangles and a couple of other bits were noted. Even in gloss black overall, it’s an impressive bird. Second gloss coat.

Final rating is once again a top mark; reason? It’s THE best game in town IMO, fit is spot on, and it’s good to see this kit available again. If you want to build hunters, get a bunch of these kits and go to town… there are still plenty of aftermarket cockpits and decal options out there. Sincere thanks to Hobbico for sending the model to the review corps, and the team for allowing me to build it. Buy five and color up your display bench!