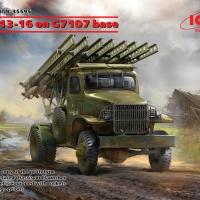 From Wikipedia: “The Katyusha multiple rocket launcher is a type of rocket artillery first built and fielded by the Soviet Union in WWII. Multiple rocket launchers such as these deliver explosives to a target area more intensively than conventional artillery, but with lower accuracy and requiring a longer time to reload.

They are fragile compared to artillery guns, but are cheap, easy to produce, and usable on any chassis[ A Chevrolet 7107 truck, for instance].  The Katyushas of World War II, the first self-propelled artillery mass-produced by the Soviet Union,were usually mounted on ordinary trucks. This mobility gave the Katyusha, and other self-propelled artillery, another advantage: being able to deliver a large blow all at once, and then move before being located and attacked with counter-battery fire. Katyusha weapons of World War II included the BM-13 launcher, light BM-8, and heavy BM-31.

Although this type of weapon has existed since the 15th century (Leonardo da Vinci having perfected a similar machine), the design of the Katyusha may have been influenced by the Machine infernale of Giuseppe Fieschi (1790-1836) - Fieschi was honored in a religious service at a Moscow church in 1942 at the prompting of the Soviet engineer General Andrei Kostikov, a co-developer of the Katyusha rocket-launcher.

Initially, concerns for secrecy kept the military designation of the Katyushas from being known by the soldiers who operated them. They were called by code names such as Kostikov guns, after A. Kostikov,the head of the Reaction-Engine Scientific Research Institute, and finally classed as Guards Mortars. The name BM-13 was only allowed into secret documents in 1942, and remained classified until after the war.

Because they were marked with the letter K (for Voronezh Komintern Factory), Red Army troops adopted a nickname from Mikhail Isakovsky's popular wartime song, "Katyusha", about a girl longing for her absent beloved, who has gone away on military service. Katyusha is the Russian equivalent of Katie, an endearing, diminutive form of the name Katherine.

For your edification, click the link to a short (:58) rendition of the Russian folk song Katyusha from the  'Girls und Panzers' anime series:  https://www.youtube.com/watch?v=3rkn-xqhSDc

Now that that is out of the way, it's on to the kit from ICM Holding. In a never ending struggle to get the most, if not all, that can be had from a given model kit ICM has combined previously available kits,  the BM-13 and Chevrolet 7107 truck. And to keep it going even further, ICM Holding is issuing this exact same kit with Soviet crew figures in the near future.

While the BM-13-16 kit has been included with other vehicles in the ICM Holding family, the Chevrolet 7107 truck seemed to be the favored conveyance for the Russians during the Great War. Possibly owing to the fact that the United States 'lent' over 47,000 Chevrolet 7107 trucks to Russia during the war and the ease of marrying the two systems ( launcher/truck) together. Regardless, what ICM provides is an attractively detailed Chevrolet 7107 series truck chassis with an equally beautiful and detailed launch system.

Assembly begins with the chassis frame rails and its attendant parts (leaf springs, cross members, fuel tank, etc.).  Additional parts are added for the power transfer case, steering linkage and a wonderful example of the 235 cu. in., six cylinder engine of the Chevrolet truck.  Unlike some other ICM releases showing off the engine won't present much of a challenge and that engine would definitely benefit from the addition of some ignition wires and hoses. The engine compartment includes everything from the fuse box (attached to the firewall), master cylinder, starter, distributor, etc., etc., etc. Adding brake and electrical lines to the rest of the chassis would also be a big plus as most of the running gear/drive train of this model will be visible once completed.

Having completed the chassis and running gear it is on to the cab. All of the levers, foot pedals, brake handles, etc. that existed in the cab are provided as are the door handles and window cranks for the pose-able doors. (You remember roll down windows?)  Tires and wheels are two piece, injected-molded plastic affairs. The door handles and engine grill are also among the individual parts. One small proviso about the engine grill (part# A28), you might want to wait until after you have placed the headlamps and running lights to the front fenders before attaching it. It will just make your life easier.

Something not mentioned in the instructions is that the front windshield can be posed opened or closed. (If you remember positionable windshields you are permitted to wear knee socks with your sandals.) There are optional, rear fenders provided but no explanation as to the what or wherefore of their use. Dealers choice, I suppose?  While on that subject excellent, clear parts are provided for the front windscreen, back glass as well as side windows. A real plus is the fact that those clear bits may be attached from outside after painting.

At this juncture it is on to the BM-13 portion of our program. The prototype BM-13 was a series of simple rails from which the rockets were placed and launched. This assemble is a bit on the tedious side (you assemble eight, almost identical launch rails) but when done you are the proud owner of a wonderful looking launch system common to the BM-13. ICM provides templates to help with aligning all those rails...nice.  Additional details are included in the kit for the launcher support and associated hardware.  Optional parts are provided to allow you to show the launcher in either firing position or travel mode. That option does not exist for the rear stabilizers (travel mode only) but a few modeling skills can remedy that omission.

The rockets (sixteen of them) are simple to assemble as they are only two parts. After attaching the fins, the suggested color is overall silver with back fins. Those rockets attached to the upper and lower portions of the rails. ICM includes the attachment points on the rail from which the ignition (launching) wires ran. You get to carefully drill those out and provide your own wiring, tedious maybe but not a daunting task.

At this juncture about all that is left to do is add some ancillary bits: rear view mirrors, hood latches, etc. and its off to the paint shop. (A large dose of Olive Drab is all that is needed.) There are two, simple  marking options provided: one for the 84th Red Banner Novozybkovsky Guards Regiment and one for an unknown mortar regiment. The Russian military seems to have not been much of a stickler for unit markings and such during WWII. (Pure speculation.)