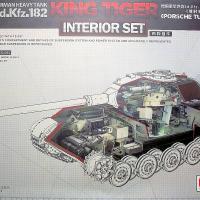 The Interior kit is includes a lot of steps and refers to what parts/build steps from the main tank kit you need to do to build the whole tank correctly which is a great help and very easy to follow. There are also several parts that will not be used as they are from the other version of the King Tiger with the Henschel turret. Also a very good idea is the amount of painting instruction details given at each of the build stages.

Step 1 through 6 - builds parts of the lower hull and suspension real no issues. I would suggest that the part numbers M2 and M6 (stage 3 and 4) at Stage 1 before the cross supports are installed to easy installation. I also found it would be easy to install P50 incorrectly. The part M8 was also a tight fit. The parts Q10 and Q1 need to carefully be installed.

Step 7 through 11 Install details into the main hull /crew compartment. In stage 7 you fit the bottom escape hatch and I would suggest you do this at Stage 3 instead as it is very hard with the suspension fully installed. At stage 9 I found it very hard to install the subassembly B, so I removed the location pins to make this easier.

Step 12 and 13 - Assembly and install of the rear Fire wall. The only issue here was the assembled fire wall was a tight fit and also needed so filler on the upper sides once installed.

Step 14, 15 & 16 - adds addition crew compartment details installation. The only thing to be careful of here is the Driver’s seat install which was a challenge.

Step 17 through 19 - builds and installed the very detailed Engine. The only recommendations here are ensure you install the parts K3 in the correct orientation, clean the slot on part L81 and the slot in L90. I would also suggest the engine assembly would have been a lot easier at the Stage 16 as it’s a very tight fit with the side walls installed.

Step 20 through 23 - installs the remaining engine compartment parts. This was all very easy. Here I did find it very difficult to install the rear internal wall part M18 main due to buildup of the other installed parts. It helped to now install the main kits rear panel (stage 29)

Step 24 through 30 - Installs the Transmission and remainder of the crew compartment components. The parts Q21 and Q22 at stage 26 in my build did need some trimming and twisting to install, this could have been due to a buildup of not correctly lined up parts on my part so just be careful. You also need to be careful installing the assembled parts K16, J21 and J22 as its hard to line up the location pins.

Step 31 through 32 builds the Ammo racks in the main hull. This was easy, I would just say be careful to build in some sort of order which I found to be the bottom photo etch parts then the plastic parts followed by the back support photo etch part.

Step 33 and 34 - builds the hull machine gun and then installed the hull main body. This was very easy.

Steps 35 to 37 Builds the hull crew compartment top and engine covers. Again this was very easy and no issues

Step 38 and 39 adds the interior details to the turret. At this stage it shows the assembly and installation of parts N50,N11, N6, N14, N1 and N19. The assembly can be done now but the install should not be done at this stage but at stage 56. This was the only error I found in the instructions.

Step 40 through 50 is the assembly of the turret basket. These steps had not real issues and was very simple to do. I would just point out the following items, at step 42 ensure you mount part N83 before N9. Part N88 was a tight fit so be careful and lastly the location of part N86 was not clearly defined.

Steps 50 to 56 are the main gun interior part assembly. There is an error in the location fins on parts N27 and N28 so I had to remove them to assembly them correctly. No other issues were found here.

The final steps are 57 to 60 which adds the gun assembly and ammo racks to the turret.

The painting and decals were done during the stages of build.

Overall I found this interior great and it covered all the interior of this awesome tank. It really adds everting you can think of to the interior. This is very well detailed and adds so much to this great model! I would add that adding this to the MENG King tiger is a lot of work and not for the faint hearted and you need to be a experience modeler to tackle this.

Thanks go to MENG for providing this kit to review and IPMS USA for allowing me to review it for them.