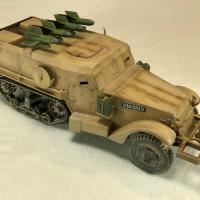 Dragon, in its Six-Day War series, has already produced a 1/35 scale kit of an Israel Defense Forces M3 halftrack, and now another interesting variant is available for modelers. This new kit features an M3 with Nord Aviation SS-11 wire-guided antitank missiles, which was done to strengthen the offensive capability of IDF halftracks. This kit will attract a lot of interest when sitting in your model display.

This sturdy Dragon box is filled with lots of plastic, a lot of it going to the spares bin.

Hmmm, after doing research, I only found only two pictures of the vehicle with the missiles mounted, so I am not surprised to see two unidentified units…

The first step begins with the engine, drive train, and drive wheel assembly. Everything fits very nicely and the engine has some great detail that unfortunately will be hidden under the hood. Each one of these sub-assemblies has a large number of parts, but nothing to excessive like we have seen in the past.

Step two starts with the assembly of the wheel bogeys. There are a lot of tiny parts that are bit tedious and challenging to fit together, but with a bit of fiddling, they fall into place. There are around 25 parts per bogey. The M3 only has two of them, one per side.

Step three gets a little bit confusing. The chassis is being constructed with a lot of little parts that you don’t want to miss.

To the back of the chassis, there are two diagrams for the exact same set-up of the bogey hook ups. One includes the shock absorber set up, the other doesn’t. Pay extra attention to which version you choose and follow one or the other diagrams.

Step four is straightforward. The bogeys are glued into place as well as the drive train and wheels. The engine is fixed into place too. Two front bumper options are given. I went with the winch with reel and hook option that includes the nice brass chain.

Step five/six is possibly the most challenging segment of the entire build. Dragon’s molded two piece track might give you excitement. And they should but are a challenge to assemble and install. The drive and idler wheels should be after the tracks are built up.

The inside half of the track is glued on. Then the drive and idler wheel sandwiched in between. In order for the outside half of the track to fit, lots of pushing and pulling is required. The outer track piece has grooves that fit with the inside. The tricky part is that the inside and outside track pieces are not symmetrical for the left and right side of the vehicle. This means that while the left outside track has the grooves on the right side, the grooves are on the inside for the left track assembly. (See picture of step five/six)

Step seven, eight, nine and ten all consist of the interior of the cab. Minor details here and there but nothing will be shown. The defense plate in front of the windshield can be folded down, your choice.

Steps 11 up to 18 all include the aft section of the truck and the construction of the missiles. Everything goes together fine here with no problems.

Step 19 starts with the missile rack being constructed on the roof of the aft section. The top hatches are glued in place. (Make sure they are not upside down…)

The cab and aft section meet on the chassis with superb fit. The front grill with the headlights are glued on as well. Now it looks like the good old M3. The roof consisting of the missiles is the last sub-assembly to be glued on. It does not fit to the cab and aft section. A nice sized gap is left between the top of the window and front of the roof. Part C9 is said to go under the roof but would not fit. I opted for some filling, and sanding though, it all turned out looking fine.

First, a red brown primer was applied to the entire vehicle followed by two coats of hairspray. The base color of Tamiya Desert Tan, and Buff was sprayed on the vehicle and a lightened tone sprayed for modulation. After that dried for a bit, I started the chipping with water and a fine paint brush. I focused on edges and where the crew might be stepping and scuffing things up.

The tires were then painted Tamiya NATO black and the bogey and suspension area were left primer black.

The decals went on with no problem and then the whole vehicle was sealed with Future.

On this vehicle, I tried oil weathering for the first time and loved it! I used a variety of different oil paints to make very realistic discoloration and modulation tones. Some streaking was added under some of the bolts and grab handles to give a little more interest. I found a video on the web by Mike Rinaldi explain how he performs oil weathering. A great video indeed.

Next, clumps of AK European Earth and North Africa dust pigments were applied to the bogeys and drive wheels. Some of the pigment was rubbed off using a Q-tip. This method being shown on the tires.

The tracks were treated the same way with the pigments and then a light dry brushing of AK Steel to burnish them.

A splatter effect was achieved on the lower parts of the vehicle by mixing odorless thinner with the pigments and flicking it on.

This kit is sure an eye catcher when sitting in your display. The engineers at Dragon once again hit it out of the park with excellent details in this kit. My only issue with it was the track assembly and a minor gap between the roof and upper hull.

Overall, I think this kit can be built by intermediate to experienced modelers as it requires a bit of patience and sorting through all the parts. The end product looks great.

As always, thank you to Dragon Models for providing this kit for review, and to IPMS USA for giving me the opportunity to build it!

Driver Door and Jerry Can Detail