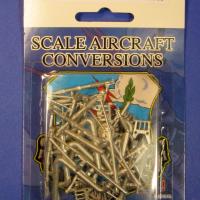 Scale Aircraft Conversions specializes in white metal replacement parts. Its line of replacement landing gear has been expanded to include a set for the ICM 1/48 He 111Z-1 Zwilling.

The set is including a total 20 parts covering the main landing gear struts, fork and tail wheel. I am not 100% sure, but most likely these parts can be used with any of the ICM (single fuselage) He 111.

These parts are drop-in replacements for the plastic parts. To complete the landing gear, there is an extra plastic part that needs to be used. That part (c-10 from the instructions) does not carry weight; hence it makes sense to not replace that plastic part with white metal.

Considering the size -and weight- of the He 111Z-1 Zwilling, investing on a sturdy landing gear is likely to be a good idea. In addition, when using white metal landing gear, you can always ‘tweak’ the landing gear strut for an improved alignment of the parts, which again in a large model airplane is an extra advantage.

You can see from the pictures the parts are very cleanly molded and formed, without any visible molding lines (typical of plastic parts). Not only that, but the tail wheel strut is molded as a single piece, while in the plastic form there are a few parts that go into that subassembly, so you have overall less work.

You can also see in the images that a few of the parts are a bit bent. That happened because there are plenty of parts in the blister. The white metal parts are very easy to bend back into position or tweak as needed to get that perfect wingtip-to-ground distance alignment on your finished model.