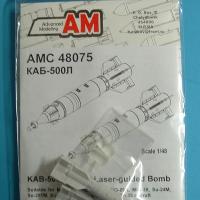 To those who model Soviet era and modern Russian aircraft there has been a welcome proliferation of weapons which have emerged on the market, so we have something to hang on aircraft models other than rocket launchers and dumb bombs. Unlike the west, the Soviet, and now Russian military is not known for the use of smart ordnance, and rare were the pictures of them fitted. But a wide range of weapons exist for specialized missions and the pictures coming from Syria show smart weapons being hung.

A new manufacturer from Russia has come on the scene to offer perhaps the widest range of munitions than we have seen so far on the market – Advanced Modeling (AM). Multi-media kits with cleanly cast in gray, durable resin; the detail is superb.

This set provides a pair of 500kg laser guided bombs (LGB), the equivalent to the US GBU-16, 1000lb LGB. Most striking is the seeker head which looks very similar to its US counterpart. This is the first time I have seen this weapon available in model form. The kit provides the bomb body (already finned), the bomb nose with the mounting lugs cast adjacent, clear resin seeker heads (which I forgot to photograph), the base plate and a decal sheet. The clear resin seeker heads allow the modeler to depict the lens.

This kit is a bit challenging in a few areas. The first is to work carefully around the fin assembly to ensure a clean separation. The nose cones, once removed slid into the recess of the bomb body. Maddening are the small separate lugs which must be removed, cleaned up and attached to the bomb body. There are many opportunities to shoot each piece into the gaping maw of the carpet monster, like I did; I scratchbuilt replacements. Fortunately the base plates fit well – check the instructions for the right orientation. Lastly, the modeler needs to make an extension to attach the seeker head – not hard and the instructions help. Make sure you put a droop in the seeker head, since they don’t straighten until powered up. To paint the weapon, I did no preparatory work. The instructions call out for FS26473. I sprayed the bombs Model Master Aircraft Gray FS16473, which is glossy. I sprayed the whole assembly including the clear seeker head. Once dry, I applied the decals without issue; they were easy to work for such small markings and settled down with Micro Sol. I sealed the decals with Future and then applied a flat coat of Testors Dullcoat. A black wash was used to highlight the details. Lastly, I used Tamiya Smoke to represent the seeker head window.

Not a bad bit of work, except the mounting lugs, I would sacrifice detail to cast them directly onto the bomb bod. The AM instructions list the aircraft types which carry this weapon, which is everything modern in the inventory. This is a great weapons set, which I highly recommend.