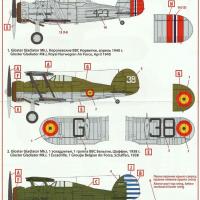 Recently I had the pleasure of tackling ICM’s new Gloster Gladiator aircraft kit in 1/32nd scale. As is, the kit comes with a couple of British Air Service options for early World War 2 campaigns, but if you want something a bit more exotic, ICM has answered the call with a new decal sheet offering markings for four different nations which also used the Mk. 1 – China, Greece, Belgium and the Netherlands.

All of the decal combinations offered are essentially fairly basic, with national markings and a few letters and numbers as well. Of these, only the Norwegian markings require some preparation, as the red of the marking bands needs to be painted on before decaling. The simplicity of this decal set permits you to easily add aircraft- specific details either from your spare decal stock or paintbrush if you have another particular vehicle in mind. In addition, the national markings are useful for a number of aircraft in this scale – I’ll be using the Greek and Belgian markings on a couple of Hurricanes I’ve been meaning to make, for instance.

Based on my application of the decals which came with the Gladiator kit and which were made by the same manufacture, these decals will prove to be thin, with very little film and excellent color registration. Application is easy with excellent conformance to uneven surfaces. They really are excellent decals in all respects.

Overall, this decal set is extremely useful for conversion of the Gladiator Mk. 1 kit or for any of a number of other WW1-era aircraft in this scale and can result in some really distinctive models. I can’t recommend them enough. Kudos to ICM for adding a little more spice to the Gladiator pot. My thanks to ICM for offering this exciting sheet and to IPMS/USA for a chance to play with them.