The Gift of the Move - Operation Milkman 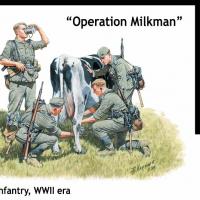 Operation Milk Man is another fine “vignette-in-a-box” from the folks at Master Box, and distributed by Dragon Models. This clever vignette depicts four German soldiers taking a brief respite from the rigors of combat to enjoy a few spoils of war …fresh milk!

The four figure set shows two soldiers milking the cow (one doing the pulling and one to hold the cup), a third figure is supervising the milking operations while leaning up to the cow. The last figure is gulping down a cup of the fresh milk from his canteen cup undoubtedly wishing he had a big hunk of Apple Strudel to go with it!

All four figures are cast in dark yellow styrene. They are nicely and naturally posed, and generally speaking the detail is good for plastic figures. The weakest a part on all the figures are the heads, with one being particularly “block-headed”, and the others a little on the “fat” side. These are all easily replaced by a good quality set of resin heads from your favorite producer, Alpine, Hornet, Verlinden etc.

Based on the uniforms I’d place these figures in a 1940-1943 timeframe. All wear the M35 Tunic in Field Grey with Stone Gray wool pants. Headgear varies by figure with one wearing the M35 steel helmet, two in the M34 soft caps, and one not wearing any headgear.

Uniform details are good for plastic figures, but they do lack the crispness resin figures have, but this is a limitation of the metal molds used. Because of this I find them a little harder to paint well because some of the details are a little softer, on belts and insignia for example. The collar and uniform insignia would also benefit from Archer uniform decals, to add that touch of detail,

Individual equipment includes all the usual items, bread-bag, canteen, mess kit, gas mask canister, and shovel. Three figures carry the K98 rifle. Those figures include nicely cast Model 1911 cartridge pouches that are shaped to the figure’s pose, although I found them to protrude out from the belt, getting in the way of an arm in one case. Some sanding of the backs of the pouches was required to get them to “sit”. The drinking figure carries the MP 40 and includes one set of ammo pouches.

I used Vallejo and LifeColor acrylic paints for the uniforms and oils for the faces and skin.

All in all, this set builds up into a nice vignette-in-a-box alone or would also compliment any vehicle placed next to them in a small diorama. With the addition of some resin heads, you have a real winning and convincing scene! Highly recommended.

Thanks to Dragon Models and IPMS/USA for the review sample

Figure before and after