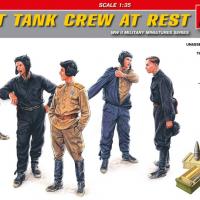 MiniArt is a Ukrainian company specializing in 1/35 figures and some vehicle kits. The figures tend to be packaged in groups with unique poses or unusual subjects. Over the years, they have become one of the leaders in injection molded figures.

This kit is a re-release of their earlier kit number 35009. This kit had been discontinued for a while but was showing up as a special addition to some of Miniart’s armor kits. Fortunately, Miniart is now offering this kit again as a “Special Edition”, which includes some bonus sprues. The kit includes five figures in various relaxed poses, as well as a sprue of side arms, and three sprues of ammo boxes, and 152mm tank shells.

The figures have some minor flash, but it’s really not bad in most places. Make sure to take care when dealing with the flash on the heads, helmets, or hands, because you won’t want to lose any of the nice details. The five figures are wearing the typical Russian tanker uniforms and coveralls, with the khaki/tank tunic and pants, black/dark blue coveralls, and typical boots. The uniforms and coveralls are nicely done, with appropriate wrinkling and folds for the poses. The poses are nice too, with four standing figures and a seated figure smoking a cigarette. One of the standing figures is posed leaning against a vehicle and another is pulling his coveralls on over his tunic, which adds a nice variety. The faces are well done, and the kit provides five different faces with good details on the eyes, nose, and mouth.

The ammunition box is very well detailed and requires some careful assembly, but the finished product is very nice. Two types of 152mm shell are provided. One anti-concrete shell, and an anti-armor shell, and the kit provides the ability to build 3 boxes of shells.

I painted mine with Vallejo color and Andrea Miniatures color for the flesh. Both types of paint worked well over a thin layer of grey primer.

I highly recommend this kit. The poses are excellent and the additional equipment is a nice touch for extra details in a diorama. Thanks to MiniArt and IPMS/USA for the review kit.