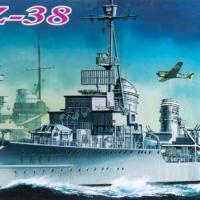 The Z-38 was a Zerstörer 1936 A-class destroyer, also known as the Narvik class destroyer by the Allies. These ships carried only their hull number and were not named by the Germans. Constructed by F. Krupp Germaniawerft AG in Kiel, she was fitted with leftover parts intended for larger ships, including 155mm twin turrets and 5.9inch guns. Closer in size to a light cruiser, her wartime displacement weighed in at 3,691 tons and hosted a crew of 330 souls. She was launched on August 5th, 1941, and commissioned on March 20th, 1943. Soon after completion of her sea trials, she was selected for escort duties and found herself assigned to the battleship Scharnhorst. Her colorful wartime record was extensive and, nonetheless, just as honorable. After WWII, she was seized by the British and used as a test ship under the name Nonsuch. She was scrapped in 1950. A total of 15 Zerstörer 1936A-class destroyers were produced by Germany.

Dragon has previously provided us 1/350-scale kits of the Z31 and Z39 destroyers, and now we have their sister-ship, the Z38. She can be built full-hull or waterline-hull and features:

All the plastic has the expected quality that precedes the Dragon name; flash free and clean, the detailing is incredible, to say the least. The sculpted crew figures are absolutely jaw dropping and will leave you amazed. The Dragon guys really like using their slide molding technology, allowing their CAD designer to raise the standard once again in the ship-modeling world. Using this technology, they have managed to simplify basic modeling building construction and expand on more dimensional compound detailing. The photo etch parts are beautifully done and the decals also look exceptional. When magnified, you’ll find all the fine print in register. The instruction sheet also is a well-planned masterpiece; I could not find any faults or flaws of the in-box contents in my examination.

Fundamental test fitting proves construction to be 99.9% near perfect. This is a must have for the Kriegsmarine warship collector. I highly recommend this kit to any experienced ship modeler.

Thanks to IPMS/USA and Dragon Models USA for the opportunity to review such a beautiful kit.

Other PE details
Previous Next