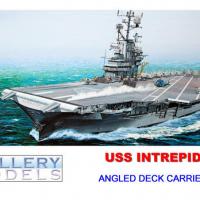 Eighteen aircraft come with the kit. I’ll use all but two of the helicopters, and I added three Trumpeter A3 Skywarriors. Each of these aircraft is a small kit by themselves, with anywhere from a dozen to twenty parts. Many of the parts are quite small or very thin and delicate, so extreme care is needed when handling them. I had crushed a Skyhawk’s tail, and launched a Crusader main gear into the unknown before I knew it.

All the kit’s aircraft come with wings unfolded, but in reality unless they’re about to launch, aircraft are almost always seen on board with their wings folded. I planned on having one E-1 Tracer on the cat about to launch, so all the other aircraft (except the A4s) would have their wings cut and folded. That will make the deck look more empty, but I’m counting on Gallery releasing more aircraft in the future, and I plan on bringing the squadrons up to full strength eventually. Also, Skyhawks and Skyraiders were almost always seen on deck with their drop tanks attached, so for the Skyhawks, I set about replicating tanks from cut pieces of sprue trees, carved and sanded to shape. The smaller diameter Skyraider tanks were made from leftover IJN torpedoes. Pylons were made from small Evergreen strips. A couple of completed aircraft will be glued to the hanger deck where they can be seen, and construction on the ship will recommence.

Construction and painting of the aircraft was done a lot like any model aircraft. I considered adding landing gear bay doors, but pretty much gave up as too time consuming for a review build. I did add some in more notable positions – on the A-1s and the SH-2s. The planes that would have their wings folded (that would be most of them) were cut in the appropriate places. The scribed lines correspond pretty closely to the actual fold joints, so placing the cuts was easy. After all the necessary cuts were made, the wheels and drop tanks were attached, and all the aircraft were give an airbrushed coat of primer white. The landing gear (as well as the wheels on the yellow gear) are quite tiny, and more than a few had to be re-made from scratch after losing the originals to the carpet monster. The top side Gull Gray, lightened with white, was hand brushed next, followed by the black noses (where appropriate), anti-glare panels, wing edges and wheels, and dark blue canopies and cockpit glass – all hand brushed. Wheel hubs were painted white with a drop of paint on the end of a toothpick. A fair amount of time was spent painting, repainting and re-repainting, mostly to correct for shaky hands. An overall coat of Future prepared the air wing for decals.

In order to represent USS Hancock’s Air Wing 21, I needed to draw up a new set of decals. Considerable time was spent researching Hancock’s embarked squadrons and images of her aircraft. The carrier deployed eight times with CVW-21 to Vietnamese waters (plus once with CVW-5), and the markings of the various deployed squadrons changed between deployments. I settled on her November 1965 – August 1966 cruise, a period of her air wing’s most successful activity. This was the first of many instances where Ray Bean’s invaluable disc of “Angled Deck Intrepid” images proved their worth.

Satisfied that I had narrowed down the search to the proper aircraft markings, I drew them with the aid of a computer drawing program, to include the squadron emblems and motifs, intake warnings, serial numbers and aircraft numbers. Once the decals were fitted and adjusted to the kit’s aircraft, they were laser printed on to decal film. I included enough to fill out the squadron’s numbers in hopes of having supplemental aircraft sets appear in the not too distant future. White numbers, when needed, came from the decal morgue. From the kit’s decals, I used the stars-and-bars and the “NAVY” markings, and they proved perfectly workable. The only slip in the kits decals that I noticed were that only enough stars-and-bars are included for two of the four choppers (they seem to have neglected the ones that go on top and bottom of the aircraft). Also, the Trumpeter A-3 stars-and-bars are either too large or too small – I opted to use the large ones.

Once the time-consuming decaling process was finally completed, the aircraft were shot with another Future coat to level the surface, and a final Dullcoat to bring down the sheen. The folded wings were attached. The painting touched up, and the air wing was ready to go aboard.

In order to add a little more life to the flight deck, I purchased a set of Gallery’s deck vehicles. While these are made to represent more modern “white gear” found on contemporary carriers, most are close enough in size and configuration so that they can be back-dated to represent 60s era “yellow gear”. The only real exception is the “Tilley” crane, which has undergone several transformations over the generations, and current models are different enough from those used in the 60’s to make the one in this kit unusable for my purposes. Perhaps Gallery will eventually decide to design their own complete set of yellow gear to suit their angled deck Intrepid. In the meantime, I started to build my own from scratch. More on that effort later. My deck tractors were painted in a similar assembly line fashion as the aircraft, and new decals were drawn, printed and applied to this equipment.

With the aircraft completed, work can recommence to the final stage of the ship – hull construction up to the flight deck and the island, complete with more of Hancock’s own particular modifications.

Thanks to MRC and IPMS for the opportunity to build and review this kit.