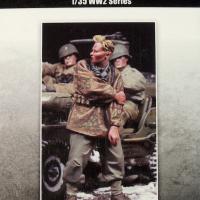 The Bodi’s Wounded German Soldier is a beautifully sculpted figure with a very natural pose and extremely sharp detail. The figure is modeled holding his wounded left arm and stands about 5 ft. 8 in. tall. The box art shows the soldier under the watchful eyes of a U.S. Jeep driver and passenger, also The Bodi figures. The Bodi is a Hungarian company that produces resin figures sculpted by Krisztián Bódi in 1/35 and 1/48 scale.

The kit comes in three pieces - body, head, and left hand. The figure is molded in a medium gray resin with some minor flash at the end of the sleeve and on the back of the figure’s neck. Flash between the two legs will need to be trimmed away. Mold seams are visible on the outside of the leg. The mold seams are not apparent on the upper body, or somehow cleverly concealed in the seams of the figures tonic.

The figure’s stance is quite natural with the knees slightly bent, legs spread, and the head looking off to the right. The right arm is grasping a tear in the left sleeve with an apparently wounded left arm. There is a tear in the trousers on the right knee. The figures head includes long wavy hair that is painted blonde in the box art. The wounded figure has an appropriately pained expression on his face. No helmet or cap is provided.

The figure appears to be wearing a poncho, as there are no center seams or buttons. Standard trousers are shown painted field gray on the box art. The figure’s boots are ankle boots painted brown, with field gray gators. The boots and gators are very nicely detailed.

The figure’s head is very nicely sculpted with details for the eyes, nostrils, nose, ears, and long wavy hair. The only apparent seam is on the back of the neck where it can be easily corrected. The head fits nicely onto the body with a nice gap for the shirt collar. The head is very naturally turned with his head looking to the right. The underside of the figures poncho is not hollowed out, which is easy enough to do with a moto-tool. The figures left hand is a separate part and his nice detail, although the fingers appear slightly stubby. There is nice separation between the fingers.

I painted the figure with Vallejo acrylics and Lifecolor acrylics for the face & hands. A camouflage similar to the box art was created with light brown, camouflage brown black, and light green. Field gray was used for the figure’s pants.

This is one of the nicest figures I’ve seen modeled and look forward to doing more. Thanks to The Bodi for producing wonderful figures and providing review samples to IPMS.