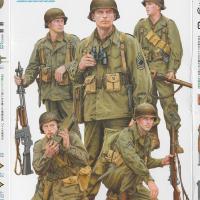 Tamiya’s new 1/35th scale figure kit “U.S. Infantry Scout Set” includes plastic parts for making five U.S. army WWII infantry figures. The kit comes in a 10” by 6” by 1 1/2” top-opening box. The box contains four sprues of plastic parts, a double-sided instruction sheet, and water-slide decals. Sprue CA and sprue CB provide the weapons and accessories. The weapons included are: an M1918 BAR with choice of open or closed bipod, an M1 carbine, two M1 garand rifles, an M1A1 thompson, two bayonets, three knives, and six hand grenades. There are enough entrenching tools, canteens, and helmets for each figure. The helmets are molded with the straps pulled up over the brims. Two of the helmets have mesh coverings molded on. Sprues X and Z provide the parts for the meaty bits and figure-specific accessories. The instructions provide a list of recommended Tamiya paints, assembly instructions, and a description of the ranks depicted by the markings on the decal sheet. The instructions also include a small map that can be cut out and displayed with the figures. The painting instructions are good for painting the large parts but the box top illustration is more useful for painting the fine details.

The detail molded into the parts is the best I have seen in a figure kit. The molding is so crisp that you can see the ribbed texture and grommets of the web belts. The torsos are provided as front and back halves. This seems like a good way to avoid the sink marks and flow lines that can happen with thicker parts. The seams between the parts are very precise and usually fall where seams in the uniform would be. The torso parts are molded with recessed areas where the accessories are to go. This is a great way to give the accessories a heavy look as if their weight is pressing down into the figures. However, this makes customizing your figures more difficult as you will need to fill-in the recesses of accessories that you don’t use. Some of the equipment and arms interlock and layer. This is great for realistic and natural poses but makes assembly sequence more important than usual for a figure kit. The hands are well sculpted and do a good job of appearing to grip the items they are holding. The standing rifleman has the fingers of the left hand as a separate piece so that his hand wraps around his rifle in a realistic way. Although shown in the box top art, there are no slings provided for the weapons. If you want slings you will need to scratch-build or buy aftermarket parts.

The decal sheet provides shoulder patches for various ranks with lots of duplicates for the spares box. There are also helmet markings for a 1st lieutenant, 2nd lieutenant, and a captain. The decals work well but the yellow of the shoulder patches seems very vibrant. After my decals were placed, I tried to tone down the yellow with a glaze of khaki acrylic paint. Some of the figures have deep folds in their uniforms where the decals would go. A decal softening solution such as Tamiya Mark Fit, Micro-Sol, or Mr. Mark Softer will be needed for those spots. The decal sheet does not include any division patches, so you may need aftermarket decals depending on the unit you wish to depict.

All the figures are wearing M1943 jackets and boots which were not common until after mid-1944. The earlier uniforms were still in use through the end of the war, so these figures can be mixed with others for late-war dioramas.

After priming the figures with airbrushed flat black, I brush painted them with a variety of Vallejo, AK, and Ammo by Mig paints.

The poses of the figures are casual and natural looking, making them suitable for inclusion in a wide variety of dioramas, or the five figures can make an interesting vignette on their own. The quality of the sculpting and precision of fit of these figures makes them a lot of fun to build and paint. Well sculpted figures are a lot easier to paint than figures with soft detail. Poor quality figures may be cheap but they are poor choices to practice on because vague details just add another hurdle to jump and will lead to frustration. If you’ve been avoiding including figures with your models because you’ve been intimidated by the painting, these figures are a great way to get sharp detail to practice on without paying a lot of money for resin.

I would like to thank Tamiya and IPMS USA for the opportunity to build and paint these figures, I had a lot of fun! I look forward to seeing more new figure kits of this quality from Tamiya.