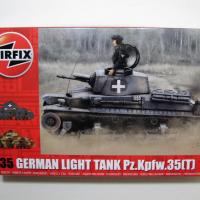 The Panzerkampfwagen 35(t), commonly shortened to Panzer 35(t) or abbreviated as Pz.Kpfw. 35(t), was a Czechoslovakian designed light tank used mainly by Nazi Germany during World War II. The letter (t) stood for tschechisch (German: "Czech"). In Czechoslovakian service it had the formal designation Lehký tank vzor 35 (Light Tank Model 35) but was commonly referred to as the LT vz. 35 or LT-35.

A total of 434 were built; of these, the Germans seized 244 when they occupied Bohemia-Moravia in March 1939 and the Slovaks acquired 52 when they declared independence from Czechoslovakia at the same time. Others were exported to Bulgaria and Romania. In German service, it saw combat during the early years of World War II, notably the invasion of Poland, the Battle of France and the invasion of the Soviet Union before being retired or sold off in 1942; the fighting in Russia having exposed the vehicle's unsuitability for cold weather operations and general unreliability. This weakness, in addition to their thin armor and inadequate firepower, resulted in the 6th Panzer Division being re-equipped with other more powerful German tanks on its withdrawal from Russia in April 1942.

The kit: This is a re-boxed of the nice Academy kit that was first released in 2013. The kit consists of 312 parts in grey styrene with no flash and light seam lines, a piece of nylon cord, a nicely printed decal sheet, an 8-page instruction fold out and a two-page paint guide/parts location diagram.

Steps 1-4 deal with the lower hull, wheels, suspension and tracks. I had no problems here except with the tracks. I’ll be honest here and say link and length tracks and I do not see eye to eye.

Steps 5-9 deal with the upper hull from attachment to the lower hull & fenders to adding all the little extras. There are a few areas where you must drill holes so pay attention to the instructions. Again, everything fit perfectly.

Steps 10 & 11 are for the construction and placement of the turret. Everything fit perfect but please pay attention to the cupola as all eight parts have specific placement areas.

The final step is where you decide to place the tow cable and/or add the extra jerry cans.

Finishing: I used Tamiya acrylics for this kit, and you are given marking for two vehicles

The decals went on and laid down nicely with no setting solution needed.

This is a very nice kit of an early war tank that goes together with little trouble. I recommend this kit to model builders of any skill level, but beginners.

I would like to thank Hornby USA for providing this kit, the review corps for letting me build it and all of you for reading this.