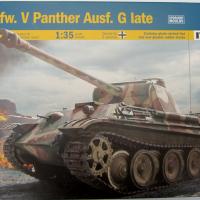 This kit by Italeri is a rebox of their 2012 Pz. Kpfw. V Panther Ausf. G kit # 6493 with the addition of upgraded moulds, photo-etch fret and new gluable rubber tracks as stated on their website. Let me preface my review by stating that as modelers we do not always follow the instructions step by step. We tend to skip around completing steps in advance while letting previous steps dry or bond. For this build and review, I did indeed skip steps, but I will describe what I found in each step, pros or cons, so the builder will be enlightened as to what needs addressed during the build. I also will not review any historical data pertaining to the Panther tank as I assume the builder will review historical data prior to the build. The Panther tank I will be constructing represents Panther #122 under the command of Oberleutnant Rasim, which was destroyed and knocked out east of Berlin in late April 1945.

Box: The box is a normal size 14-1/2” long x 9-1/2” wide x 2-1/4” tall with great graphics of the Panther G in action with beautiful camo colors on the top. On the sides are images of the three versions that can be constructed. I noticed on the top of the box that Italeri has printed “Upgraded moulds”. Contained within the box are three sprues all contained in a plastic bag, a small plastic bag containing the photo etch with decals and another small bag containing the cotton twine which represents the cable. The kit contains 290 parts estimated per Hobbico’s website on three dark gray sprues lettered A, B and C and a large ten-page fold out instruction manual.

Upon opening any model kit, what I like to look for is the amount of work, such as flashing, location holes, ejector pin release points (sink or raised marks) and mold seams that need to be addressed during construction. The parts have crisp detail with extremely sharp well defined. I noticed that Italeri has provided in this kit 25 unused parts to add to your “stash” which are identified in the instruction manual. Upon inspection of the sprues: The foundry casting texture seemed to be too consistent. The hull has depressed weld beads. There is some slight flash but not much. If one wants to show the hatches open there are quite a few holes and ejector pin release points that will have to be filled. The 75mm gun barrel is moulded in two pieces with release points which can be cleaned up easily.

The tracks consist of four sections which need to be glued together using cyanoacrylate glue instead of liquid cement. The tracks are moulded with fine crisp detail with some clean up needed. Contained on the sprue with the tracks are track sections to be added to the turret and hull for protection. There were several ejector pin release points on the underside of the tracks located in the center run. These were filled with Perfect Plastic Putty. The tracks are the VK 3002 (DB) type and appear to be a good representation of historical Panther tank tracks from reference material. I noticed several mold seams on the end connections which were very small and one should be able to clean up. Tracks were painted with Ammo Mig 035 Dark Tracks and Vallejo Model Color 70.992 Neutral Grey, which represents the Flat Steel (FS37200) as directed by Italeri.

The instruction manual is printed in black and white measuring approximately 13“tall x 7-3/4“ wide in portrait orientation. It contains 15 steps on 10 pages of clear uncluttered diagrams printed in black and white. The images for the steps also contain the paint color reference to be used along with the PE part number. There is plenty of room for notations prior to or during the building stage. The paint colors to be used are provided by Italeri in their reference number but, Federal Standard numbers are also listed for referencing other paint manufacturers. Italeri also has an excellent PDF file for conversions for their brand of paints at: https://www.italeri.com/ItaleriAcrylicPaint-Conversion-Chart.pdf. Italeri provides in the instruction manual three different versions of the Panther G:

The photo etch supplied with the kit includes eleven parts that seem to be well detailed and crisp in appearance. The rope supplied appears to be a cotton piece of twine. The kit instruction manual has a template for cutting the rope to size. This is a good addition, which makes for cutting the length of rope to exact dimensions.

In conclusion, this was an enjoyable build. At times frustrating because of all the mold seams. However, the detail was very good. As to accuracy I cannot say but from pictures and a Panther walk around book the accuracy seems to be right on. Even though there are several aftermarket accessories available, building this kit straight out of the box gives a good representation of the Panther G. Finally the call out numbers for Italeri Paints and the FS numbers were a welcome addition. I highly recommend this kit.

Thanks to IPMS/USA, Italeri, and Hobbico for allowing me to review this kit.

Step 1 as printed in instructions and annotated with corrections

View of completed model from the front

View of rear of vehicle