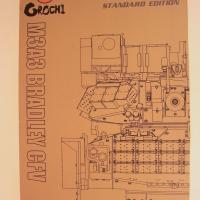 The M3 Bradley CFV is very similar to the M2 Bradley IFV (Infantry Fighting Vehicle) and is fielded with the same powerful two-man 25mm Bushmaster Cannon turret with the coaxial 7.62mm machine gun. It only varies from the M2 in a few subtle ways and by role. The M3 is classified as an armored reconnaissance and scout vehicle and does away with the firing ports found in the M2 series. The M3 also carries more TOW missiles as well as more ammunition for its 25mm and 7.62mm guns.

Orochi is a new company producing model kits. This is their first offering to hit the model world. Orochi offers two types of kits for the M3A3 - the standard edition, (which will be reviewed here) and the deluxe edition. The difference between the two kits is the deluxe edition comes with metal individual track links and pins, a turned metal barrel for the 25mm Bushmaster Cannon, and an EOD bomb disposal figure. The deluxe edition retails for $62.00.

Upon opening the box you find six light tan sprues, one clear sprue, upper and lower hull sections, bag of black hard plastic individual track links, decal sheet offering two different vehicle markings, polly caps, PE fret, and instruction booklet. The parts are molded for the most part flash free and crisp. There are some ejector pin marks that will need to be filled since they will be clearly seen. Several parts require minor clean up. The fix overall is good, but some filling will be needed. Also there is good detail on a lot of parts and a fair amount of detailing lacking on others.

Before you start step one in the instructions you must cut off several bolt heads from sprue A and glue them onto the upper hull section and the TOW Missile reload hatch. This requires the use of a fine razor saw and in my opinion is a completely unnecessary step. Why Orochi does this is beyond me as there are already molded on bolt heads on the hull parts. To leave some off for the modeler to do instead of add them in the molding process makes no sense.

There are 31 steps of constructions listed. Step one through five deals with the lower hull and running gear. Step six though eighteen deals with the upper hull. One big note here, Orochi has molded the side skirts that hold the ERA blocks directly to the upper hull. This to me is a big disadvantage as it interferes with applying the tracks and road wheels after painting. It can be done but is difficult. I recommend painting the road wheels and lower hull section, installing then on the model, and mask off the area during the finial painting process.

No interior comes with this kit, but all the hatches can be positioned either open or closed. The tracks go together well as they snap together and are workable. Orochi provides a PE wheel and track pad mask, which comes in handy.

Steps nineteen though thirty-one deal with the turret. Both the commander’s and gunner’s hatches can be positioned in the open or closed position. Again no interior is included. The tow launcher can be positioned in the stowed or firing position. The commander’s CITV is completely movable in any direction. No antennas are provided with the kit so I replaced the kit mounts with brass ones and added brass antennas. A PE sight is provided with the kit for the 25 mm sight on top of the turret. The PE part looks good, but is incorrect as the real sight on the real vehicle is Plexiglas with printed cross hairs on it.

I used the kit’s decal markings for the 2nd squadron, 3rd Armored Cavalry Regiment, 2nd Infantry Division. The model was painted in Tamiya paints and weathered with filters, washes, and pigments.

This is a good offering of the M3A3 Bradley by Orochi. For being their first model kit I think they have done very well for themselves. The kit lacks detail in areas and in some areas is incorrect. In other areas the detail is excellent. This kit does build into a good example of the M3A3 Bradley. I recommend this kit to all modelers.

I would like to thanks Dragon USA for providing this kit as a review sample and Orochi Models.