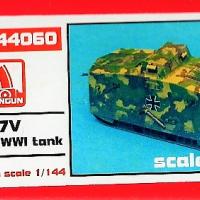 From Wikipedia: The A7V was a heavy tank introduced by Germany in 1918 during World War I. One hundred chassis were ordered in early 1917, ten to be finished as fighting vehicles with armored bodies, and the remainder as Überlandwagen cargo carriers. The number to be armored was later increased to 20. They were used in action from March to October 1918, and were the only tanks produced by Germany in World War I to be used in combat.

Following the appearance of the first British tanks on the Western Front, in September 1916, the German War Ministry formed a committee, under the auspices of its Allgemeines Kriegsdepartement, Abteilung 7 Verkehrswesen ("General War Department, Section 7, Transportation"), to investigate tank development.

The project to design and build the first German tank was placed under the direction of Joseph Vollmer, one of Germany's foremost automobile designers. It was to weigh around 30 tons, be capable of crossing ditches up to 1.5 meters (4.9 ft) wide, have armament including a cannon at the front and rear as well as several machine-guns, and reach a top speed of at least 12 kilometers per hour (7.5 mph).

The running gear was based on the American Holt tractor, copied from examples loaned by the Austro-Hungarian Army. After initial plans were shared with the army in December 1916, the design was extended to be a universal chassis that could be used as a base for both a tank and unarmored Ùberlandwagen ("over-land vehicle") cargo carriers.

The first prototype was completed by Daimler-Motoren-Gesellschaft at Berlin-Marienfelde and tested on 30 April 1917. A wooden mockup of a final version was completed in May 1917 and demonstrated in Mainz with 10 tons of ballast to simulate the weight of the armor. During final design, the rear-facing cannon was removed and the number of machine-guns was increased to six. The first pre-production A7V was produced in September 1917, followed by the first production model in October 1917. The tanks were given to Assault Tank Units 1 and 2, founded on 20 September 1917, each with five officers and 109 non-commissioned officers and soldiers.

Brengun has previously released 1/144th scale kits of the British contributions to WW I armored warfare in the form of both the male(#144056) and female(# 144057) versions of the Mark IV tank as well as an airship tug(# 144058) based on that same chassis. This time we are blessed with a wonderful resin kit of the German contribution, the A7V. The complete kit contains resin bits for the main hull and tracks. In addition, there are some small resin parts for the armament (gun barrels). Brengun also includes a small sheet of decals and a fret of photo etch for various hull details (grab handles, steps, hatch covers, etc.).

The resin cast parts are, as always, first rate. The tracks and running gear are cast as one piece and the detail here is exquisite. I would advise exercising caution when removing the pour stubs from the tracks to lessen the chance of loosing that detail. There is molded detail (note photo) either end of the lower hull that I took to be flash. It is not. The 'flash' represents flanges that look to have been employed to protect towing shackles on the real thing.

Once the parts are removed, properly cleaned up and glued together, the next construction step is to add all the fiddly bits (guns, grab handles, steps,etc.) to the tank. I found it useful to deepen the position dimples for the main gun and machine guns barrels before gluing them in place. All of the placement positions are clearly noted on the assembly instructions. Do one side, rotate the kit 180 degrees and repeat.

Two marking options (one tri-color and one four-color scheme) are provided for what has to be one of the more colorful camouflage schemes every put on an armored vehicle. With a total of only twenty vehicles being produced you have some options. After all, you are the Henry Cabot Lodge of which camouflage scheme you choose. While color call outs for the illustrated camouflage schemes provided reference AK/MiG paints I began painting experience using some non-traditional colors.

First step was to over spay the entire vehicle with Testor's Phoenician Yellow as a stand-in for the ochre. Subsequent shades were done in Nato Green, Linoleum Deck Brown and German Gray (Tamiya paints) for those respective colors applied with a brush. The tracks were painted with Gunmetal from Folk Art. The weathering was the result of applying various and appropriate shades of AMMO washes and Tamiya panel liners.pigments.

Having completed the painting process it was on to the decals, of which there aren't that many. Brengun provides the Maltese crosses for each face of the vehicles plus individual names for either 'Mephisto' or 'Baden I'. The insignia marking ( a red, prancing devil) for 'Mephisto' is also provided on the small decal sheet. Note: the decals are printed on a single sheet of carrier film and you may wish to cut them out beforehand.

This German A7V tank makes a welcome addition to Brengun's line of 1/144th scale vehicles. It fits nicely with their previous releases of the British Mark IV ( male and female versions). Now if they could figure out some way to make a 1/144th scale balloon to go along with their WWI era airship tug....

My thanks to Brengun and IPMS/USA for the review copy.