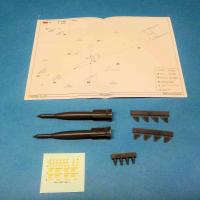 The GBU-10 Paveway II laser guided bomb is a modified version of the Mk. 84 general purpose bomb with added fins and guidance system. Eduard has produced a set of two GBU-10’s in 1/48th scale. Each set has two bomb bodies, separate front fins for 8 parts and two sets of seeker heads for the front; one ready for use and one with a cast in cover. Casting is perfect and in standard Eduard dark gray resin. Also included are the instructions and a decal sheet with all the markings.

Construction is simple. My one piece of advice is to take your time and cut slowly. The parts are small and thinly cast to make them realistic. The main body gets cut loose at the rear of the assembly. I cut each fin loose separately and the trimmed off the pour block and the cut the remainder loose with a PE razor blade. Be careful at the front of the bomb as there is a little pin to fit the seeker head onto also. There are no other seam lines. The front fins need cut loose just as carefully and trimmed at the bottom. If you take your time, they parts fit perfectly. You need to drill a hole in which ever seeker head you use and glue it on.

Once assembled, the paint choice is olive drab all over. If you selected the seeker head with a cover, it gets painted. The decals have a full range of markings and settle well. A quick wash and flat coats and we’re done.

Comparing these to some on kits I have currently built, the markings are better and the accuracy is also better than kit parts. So, fairly simple to assemble, good detail and markings will allow this to enhance any modern jet. Highly recommended.

My thanks to Eduard and IPMS/USA for the chance to review this great set.

Tail of Bomb with Pour Block