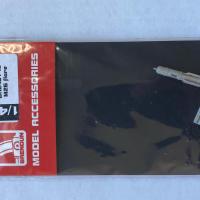 Before the days of night vision goggles and infrared sensors, US bombers needed a system to illuminate the target area before or during bomb release. Introduced in 1942, the M26 parachute flare was designed to do that. Designed to mount onto the same shackles used to secure bombs, this flare system was activated at release by a wire attached to the fuse on the nose. At the pre-set time, the flare would deploy a parachute and a shield that prevented the burning flare from blinding the bombardier. This model of the M26 could burn for up to three and half minutes at a brightness of 800,000 candlepower. There are a number of these empty canisters on eBay for those who collect such things.

Brengun has given us a couple of these flares to add to our next 1/48 scale US bomber load out. The set contains two resin cast flares and a decal sheet with stencils. Casting quality of the flares is excellent. Removing the casting blocks is easy since they are attached to the back of the part leaving a smooth flat surface after a few swipes of a sanding stick. These flares were painted in an overall grey color, so I picked one that looked close to the photo of the display they have at the USAF museum. The decals set down but wanted to silver so I went through several rounds of piercing and setting solution. I finished off with a light oil wash to pop the detail out.

This is an interesting set that I’ve never seen in a kit box. The only thing Brengun missed are the carrying lugs that the flare was mounted with. I can recommend the set if you want to add this often-missed detail on US bombers that fought under the cover of darkness. Thank you, Brengun, for another unique detail set and IPMS for allowing me to share it.