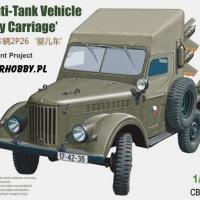 This has got to be the best last couple of years for the Middle East Wars modeler enthusiast. Tamiya is releasing an M-1 Super Sherman (not really Super, just a Sherman used by the IDF). Dragon is releasing several useable kits for the period, one of which is a newly tooled Bison II that could be used by the Egyptian Army. A company called Meng Model has offered an injection molded import pickup truck with ZPU-1. SabingaMartin has released another book, and Bronco has released three versions of the YW series APC along with two versions of this little GAZ-69.

Inside the box, we find all the good stuff. There are twelve grey styrene sprues (some are duplicates), two small decal sheets (one with data plates and the other with vehicle markings), a small photo-etched sheet, one 19-page assembly guide, and a painting and decaling guide. First look items: the vehicle portrayed on the cover can’t be built from the parts included in the kit. The rear (folded) canvas cover is not included. The frames are included so you can maybe make your own canvas parts. You get two complete sets of tires. There are a civilian looking set and a “mudder” style set. Good stuff for the spares. They also come with a molded-on valve stem. This is a very nice touch. The markings are only for two Russian vehicles. No Egyptian or other client state markings are offered.

Construction started and was easy going. There were some issues with very loose fitting parts and locking tabs not fitting in the locater parts well. This allowed for major play in both the axle assemblies and engine assembly. Luckily, both of these were not going to be very visible once construction was complete. Also, use extreme caution when handling the PE! The brass is VERY soft. This allows for accidental bending where the items aren’t supposed to be bent. I am used to parts interlocking during construction. Bronco has all the rocket mechanical parts sitting flush with each other. There is nothing that allows the parts to positively lock each other together. When I got to step 14 and 15, the issues became worse. At this point you are supposed to assemble the cab. The bed was already attached to the frame. Nothing was lining up properly. The sides needed to be forced on and this resulted in the breaking of the two linkages inside the bed. The instrument panel didn’t sit flush. I had to cut the front engine plates free to attach this. The hood didn’t sit on the sides. This required the removal of the air filter. The front grill did not fit and required the removal of the radiator to make it fit. I do not know what I did wrong, but I have made notes all over these instructions hopefully to ensure an easier build of the other two versions I wish to complete.

The build followed the assembly steps with the occasional leap ahead to assemble two half parts and stuff to speed assembly when the step was reached. The engine compartment contained the same issues as the undercarriage. The connection joins were loose and the instructions were very vague on the exact location of particular parts. Jump ahead with the instructions to insure you get nice fits on your engine parts, especially if you plan to open up your engine. In step 13 the instructions do not show you adding parts 55 and 56. These are bars that go on the upper doors. In all the pictures I have, these bars are present. They are very noticeable if you leave the upper canvas windows off. As this is what I had planned, I added them to the vehicle. Another note about assembly: if you want the radiator grill to be black, you are going to have to do some tricky post-painting. I would advise pre-painting. This is another note I have added to assist my next build. I did not do it on this one.

I painted the driver compartment and applied the decals. The instrument dial faces have raised details. The decals were added to improve the interior look. The decals are all off center and are especially noticeable on the instrument dial face. The rockets were my bane on this kit! For some reason, their assembly slowed my process down dramatically. I assume it was the red fins as, once that these were painted, the project moved forward with a purpose. Also, Bronco has you make eight stretched sprue connection points from the launcher to the rocket. As few pictures exist of this part, I used cut thin styrene rod to accomplish this.

The vehicle was fully assembled and painted with Model Master Desert Tan. It was given a gloss coat to allow washing. No decals were applied. The Egyptians appear not to have used any markings on these vehicles. I went to add the PE wipers to the windshield and they basically disintegrated. Replacements were made from styrene rod and strip. They look basic, but I think they will do. The vehicle has clear front fender marker or turn signal lights. These are super small and must be handled with care. I lost both over three times trying to clean up the sprue attachment points. I recovered them all but one time. After numerous vacuums and clearing the work bench, I still came up one short. These were made with 5 minute epoxy. They look good, except each one ended up with a small air bubble inside.

The rockets and launchers were added and the canvas cage frame was attached. To me, this is where Bronco could have done lots better. Combat pictures of these vehicles are few and far between. In almost all the photos (Israeli captured vehicles being used), the cage and canvas have been removed. In photos of Syrian and Egyptian use, the cage is collapsed with the canvas cover still attached. Only in the few pictures of destroyed examples is the cage collapsed without the cover. While I am not a model maker, I think this would have been a far better option to include with the model that just the cage. I would advise anyone building this kit either to completely remove the cage or add a canvas from tissue.

I would like to thank Bronco for doing some new Middle East War vehicles, Dragon USA for providing the review sample, and IPMS for allowing me to build a really neat wheeled vehicle. Have fun: build this or another version of the GAZ-69...there are three currently on the market!