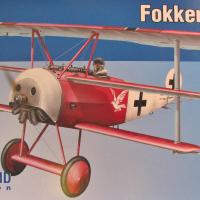 Eduard re-released their 1/72 scale Fokker Dr.1 late last year, but this time in the form of a Weekend Edition kit that includes the markings for two aircraft (one flown by Lt. August Raben, the other piloted by Lt. Hermann Vallendor). The kit builds up easily enough, and I can recommend the kit on its own. For this particular review, I have added parts from the Eduard Zoom set (product SS 576), which did a nice job of touching up the cockpit, engine, and guns.

Going a little off track for a moment, I am dedicating this review to my cousin Brian, who passed a few days ago when I was just hitting the home stretch with this build. Although it had been many years since my cousin built a model, I hope to always remember the fun we had as kids the time that our mothers took us to what would now be called a flea market, and Brian, his brother Corey, and I were each allowed to pick out a couple of model kits. We quickly built our kits, and a day or two later held our own model contest where our mothers judged, and oddly, each of us won a category. Moments like this gave me the inspiration to build more, and add more details, so I can only hope that both Brian and Corey can look down upon this plane and give a nod of approval. Rest in peace you two!

Developed by Anthony Fokker, the Dr.1 began to fly in combat as the Fokker F.1 in 1917. The upper wing measured 23 feet 7 inches across, while the plane was 18 feet 11 inches long, and stood 9 feet 8 inches tall. Powered by the Oberursel nine-cylinder engine, the plane would reach speeds of 115 mph with a service ceiling of 23,000 feet, and a range of 185 miles. The subject I chose was the ride of Lt. August Raben (yes, German for “raven”) who led Jasta 18 from March of 1918 until November of that year. I spent a fair amount of time researching Raben, and I cannot find mention of either a plane or an airship that he claimed victory over during the war. There are photos of this particular plane, which was captured by the French, in two books that I own, and they can be found on the internet as well.

Upon opening the box, you will find two sprues of gray plastic parts, which are joined in the center, a small decal sheet, and an 8-page color booklet with building and painting instructions. Building the kit out of the box will require the use of 35 parts, but there are also tires and wing centers on the sprues, which are only needed if building the strip-down kit. Construction is straightforward, and the fits are good overall, so not a lot of experience is needed for good results. I painted my plane using Model Master Lacquer Header White and Silver, Model Master Acryl Insignia Red and RLM 78 Light Blue, and Model Master Metalizer Gunmetal. Vallejo New Wood and Leather Belt were used along with Humbrol Copper for the propeller and interior, leather padding, and engine intake manifolds respectively.

I utilized the Zoom detail set (SS 576) as it has parts to dress up the cockpit including framing, instruments, pump, seat, harness, control stick (with rudder pedals) and throttle. I also used the combination intake manifold and push rod piece, ignition wire piece, and hub piece to dress up the kit engine. I intended to use the photo-etch step, but lost it when removing it from the fret; there was a daunting search, but the item never revealed itself. The cooling jackets and front cover/gun sight for the two machine guns also added a lot of punch to the project. There are also pieces of Albion brass tubing (1mm outside diameter) that I used for the section of gun barrel that stuck out past the front cover.

Early on, I decided to use Uschi .001 inch and fine EZ Line to replicate control cables and sway braces on my plane. This was my first experience with the line that can be stretched, so I will state that I found the EZ Line much easier to work with. The incredibly fine Uschi line tended to stick to my glue applicator rather than the points where I wanted it attached. I liked the results well enough that I will try the products again, and fortunately, I typically work in 1/48 scale for my WWI aircraft.

As far as my hits are concerned, the kit is well detailed, which assisted when I drilled holes for the control wires, and the parts fit well overall. The decals are nicely rendered, and match photos of the real planes that I found during my research. I like the addition of the decal showing the stitching on the underside of the plane (decal 22), which adds a nice touch. For Lt. Vallendor’s plane, a decal is included (decal 16) that looks like the paint on the cross ran down the fuselage, which matches photos of the real plane.

I have no real miss for this kit, but in my sample, I did have a challenge with the small cross decals (decal 6 on the sheet) wanting to roll up coming off the backing paper. I had to replace one of the decals with a spare. There were small gaps on the top and bottom of the fuselage, but this was easily fixed with some Vallejo putty.

In conclusion, I would highly recommend this kit to modelers with an interest in building a quick and easy Fokker Dr. 1 for their collection. With good fit and single-piece spars that run from the bottom to the top wing, building a triplane has never been easier.

Thanks to the folks at Eduard for providing this sample kit to the IPMS USA for review, to Dave Morrissette, who runs the Review Corps for selecting me to appraise this kit, to the folks behind the scenes with the Review Corps who keep things running smoothly, and as always, to you for taking the time to read my comments.

Machine gun comparison with photo-etch parts (not included in kit)

Back side of engine

Engine with Photo-etch (not included in kit)

Engine with Photo-etch (not included in kit)

Interior with photo-etch parts (not included in kit)

Interior with photo-etch parts (not included in kit)

Right side view of finished model