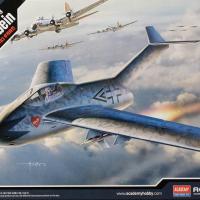 Kurt Tank’s design team late in the war was striving to design aircraft to rival rumored Allied jet fighters, like the Gloster Meteor. Unfortunately for the Reich, fuel shortages and the end of the war prevented most of the fighters designed after the Me-262 from ever seeing combat. One of these was the TA 183 “Huckebein”. The Americans captured data and plans for the fighter from the Messerschmitt plants- and these evolved into designs of the swept-wing FJ-2/3/4 Fury and the Air Force version- the F-86 Sabre. The Soviet spoils of design plans led to their MiG-15.

This Academy kit is a reboxing of the AMtech kit #484601 originally released in 2001. This re-release includes photo-etched seat belts, canopy and gear wheel masks, and a set of different hypothetical Luft ’46 decal schemes. A set of 4 optional Ruhrstahl X-4 wire-guided air to air missiles are included, as they were in the original boxing. There are 53 grey parts scattered across 6 sprues and one solo clear part- a one-piece canopy. Details on the parts are very crisp, although the troublesome sink marks that were present on the original AMtech kit are still present here. Most are not a problem, but some are in quite prominent areas- such as the gear wells and doors, and inside the centerline well for the drop tank. The most distressing ones are on the main gear tires- but time taken with your favorite filler and sanding medium make quick work of them.

The build itself is very straightforward. The instructions are in two booklets. Manual 1 contains the eight assembly steps, as well as the first three of the six schemes from the kit. Manual 2 contains the final three schemes as well as a detailed parts map of the sprues.

Cockpit detail is nice- but those who like to super detail will find improvements to add if they so choose. There is no decal for the instrument panel, so painting and dry brushing will do nicely on the raised details. The engine exhaust assembly gives the builder two options- either the Jumo or Heinkel engine exhausts. Fixing your choice to the tail end is a bit fiddly though as there is not a definite attachment point so care is needed. You also have the option of an open centerline bay to add the drop tank to, or a panel to close it off. Landing gear can be posed down or the doors can be placed in the closed position.

Overall fit of the kit though is quite excellent, although there was a very slight gap in the wing roots. The landing gear legs have very fixed attachment points so there is no need to worry about setting up the correct angle. I was anxious that with the aircraft’s tricycle gear arrangement, I would have issues with it being a tail sitter- but the kit sits just fine on all three gear with no added weight needed. The X-4 missile hard points have shallow attachment points so care is need to affix them and align them correctly. The canopy and gear wheel masks worked quite well and were very easy to use.

Color callouts for painting the various schemes list all of the major paint suppliers so there is no need to search for conversion charts to use your favorite paint. The instructions refer to the basic number codes throughout. Decals are printed by Cartograf and the schemes in order are:

I chose the scheme for Galland’s mount as he has been a favorite German flyer of mine throughout modeling and my knowledge of the war. I used Model Master Acryl for the RLM75 (Gray Violet) and RLM74 (Gray Green) scheme. After a coat of Future, the decals lay down very nicely and handled extremely well. I topped everything off with another coat of Future and left it relatively unweathered.

Overall the build was really very quick and care-free, other than the filling of the prominent sink marks. Academy did a nice job updating the kit with the masks and PE, and the excellent choices for schemes. Luft ’46 subjects can be a nice change from the norm and I highly recommend the kit to anyone who enjoys what-if builds or just if one is looking for something different.

My sincere thanks to Academy, MRC, and IPMS/USA for the review kit.