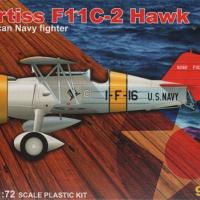 The Curtiss F11C-2 was one of the last of the Curtiss Hawk series of biplane fighters that began with the F6C-1 and P-1 series of 1925. Although later models used different wings and powerplants, the F11C series reverted back to the tapered wing. While the later F11C-1 had a metal wing, the F11C-2 wings were wooden. Power was provided by a 575 hp. Wright R-1820-78 radial engine using a two bladed metal prop. Known as the Goshawk in service, only 29 production F11C-2’s were built during 1933, and they were all issued to VF-1B, who operated them off the USS Saratoga along with some Boeing F4B-3s. In 1934, all of the F11C-2’s were upgraded, the most notable improvement being a raised turtledeck behind the cockpit and a small sliding canopy which partially covered the cockpit. These planes were known as BFC-2’s and they were considered to be a dual-purpose aircraft, fulfilling both the fighter and dive bomber roles. These aircraft were used by VF-1B and its successors for about 5 years until they were replaced by Vought SB2U-1’s in 1938. Hawk II’s were exported to a number of countries, including Bolivia, Chile, China, Colombia, Cuba, Norway, Siam, and Turkey. And Ernst Udet brought two back to Germany in the early thirties after watching Navy dive bombing demonstrations at the 1933 Cleveland Air Races, resulting eventually in the development of the Stuka. But that is another story.

Although the Goshawk was only operated by one squadron for one year, it became a famous airplane, and still remains one of the classic biplane fighters of the U.S. Navy. In fact, I recently saw a Stearman PT-17 biplane that had been converted to look like an F11C-2, a compliment to a worthy airplane. No F11C-2 survives, although the Naval Aviation Museum in Pensacola, FL, has a BFC-2 on display, and unless it is a replica, it was probably originally built as an F11C-2.

There is a lot of reference material available on the F11C-2 and similar aircraft. Squadron’s Navy Air Colors by Thomas Doll, Berkley R. Jackson, and William A. Riley, is a classic on the subject. So is Bill Kilgrain’s Color Schemes and Markings, U.S. Navy Aircraft, 1911-1950. I also found the Squadron Curtiss Navy Hawks In Action, by Peter Bowers, to be very authoritative, as Bowers was one of our foremost aviation historians as well as the designer of the Bowers Fly Baby, a small homebuilt aircraft to be seen in some numbers at fly-ins throughout the country. Other useful books include Peter Bowers’ Curtiss Aircraft, 1907-1947, William T. Larkins’ U.S. Navy Aircraft, 1921-1941, and Gordon Swanborough and Peter Bowers’ United States Navy Aircraft Since 1911.

The F11C-2 and its derivatives had been the subject of many models in different scales over the years. The three major production versions, the F11C-2, BFC-2, and the retractable-geared BF2C-1 have appeared in various scales, but the RS Models kit, which has two rear turtledecks so that either the F11C-2 or BFC-2 can be built, is a first. The first 1/72 scale F11C-2 kit was made in the late sixties by Monogram, and the instructions are dated 1968. It was part of a series of -thirties and -forties models, which included a Boeing F4B-4, Curtiss P-6E, Curtiss P-36A, NAA P-51B, Grumman F8F-2 Bearcat, Grumman F7F-2 Tigercat, and a Messerschmitt Bf-110E, not to mention their slightly off-scale but excellent Ford 4-AT Trimotor. Most of these kits are still available, and although they lack some interior detail, they are still very competitive and buildable. I built quite a number of the Monogram F11C-2 kits, converting them into the XF11C-1, BFC-2, and BF2C-1, in addition to several export models. In reality, the Monogram kit is a tough act to follow.

An RS Models kit of the F11C-2, and several other Hawk II’s, is listed in the 2003 edition of Burns’ Plastic Aircraft Kits of the Twentieth Century, but these are probably resin kits. This RS injection molded kit is cast in soft grey styrene and consists of 47 parts, plus a clear plastic film sheet with photographically produced instrument panels. Decals are provided for three aircraft – not a lot of choice, since only one unit operated the airplane for one year in that form and in those markings. These include Bn 9263 (1-F-7), Bn 9270 (1-F-4), and Bn 9282 (1-F-16). These differ only in squadron markings, with 1-F-9 being the flight commander of the third flight, 1-F-4 being the commander of the second flight, and 1-F-16 being the commander of 6th flight, the colors of the stripes and cowlings distinguishing the flights. The red tail units indicate the carrier, USS Saratoga. Those were colorful markings in those days, and they are favorites of modelers today. Incidentally, this kit is listed as an F11C-2, and another issue is the BFC-2, although you could build the BFC-2 from this kit, as all of the parts are included. There is a separate issue for the BFC-2, but all of the parts are provided for both versions in the F11C-2 kit. The box art shows a kit of the Hawk II in Chinese markings and features the small wheel pants, so apparently we are going to get a number of these issues. MPM also has a Hawk III, the retractable gear version, and in the box it looks like a pretty good kit.

The kit has a very nice interior, with a floor, seat, side panels, a couple of almost invisible levers for the fuselage sides, an instrument panel and rudder pedal bracing unit, a control stick, and your choice of a plastic and PE instrument panel or one molded from styrene. There are also a couple of other interior parts, one of which appears to be some kind of oil cooler. The fuselage is composed of four parts – two main units and two parts which make up the turtledeck for either the F11C-2 or the BFC-2. In addition, all of the bomb racks and bomb release gear are provided, although those were only used on the BFC-2. So you’ll have some extra parts with this kit, or if you are particularly resourceful, you could use the extra parts to convert an old Monogram F11C-2 into a BFC-2 if you want to scratchbuild an interior.

The major parts of this kit present no problems, although some careful trimming is required to remove the sprue join stubs on the wings and fuselage. The same problem is more severe with the struts, as the sprue joins are not on the ends, where they should be, but on the leading edges, and this requires some very careful handling to get the surfaces smooth without breaking anything. The arrestor hook on my kit totally disintegrated, but a replacement from the spares box solved that problem. Some of the parts are VERY small, including the tail wheel. The kit includes a drop tank and bracing, but it also provides wing racks, which are more appropriate for the BFC-2. The engine and cowling are resin, and the spark plug leads and pushrod housings in front of the engine are provided in PE.

In assembly, the wing-to-fuselage fit is poor, and some trimming and filling is needed to get everything right. I would suggest painting the airframe before trying to mount the upper wing. There are locating holes in the wings and fuselage which should be enlarged slightly, but once they were painted, I didn’t experience any difficulty in getting the upper wing in place. The landing gear was a little more difficult, as the instructions are slightly hazy on their exact position. The wheel pant-to-landing gear strut leaves a lot to be desired, however, and some filler is needed here. The engine includes a mounting unit on the front of the fuselage, and the cylinders fit into place easily, but the engine and cowling, not to mention the prop, have to be in place before the engine can be mounted on the airframe.

These airplanes were never allowed to get grungy, so no weathering should be done. Remember, however, that the Navy’s color schemes for these aircraft involved aluminum dope on the fabric surfaces and very pale grey on all metal parts, except, of course, for all unit markings. The upper surface of the wings was chrome yellow, while any color coding was, according to published orders, lemon yellow, a slightly paler shade. This is not mentioned in many reference works on the subject, and would hardly be noticeable on your model, anyway. But we do need to be historically accurate. Just be sure to paint the light grey areas first, and then mask them off. The fabric areas should be painted silver, with the wing upper surfaces chrome yellow. The wheels are quite difficult to paint, as there is no raised separation line between the hubcaps and the tires. The decals went on very nicely, although the fuselage bands didn’t fit quite right. No decal solution was necessary.

After completion, rigging is almost mandatory on this kind of model, as a biplane lacking wires looks very strange. I used very fine electronic wire stripped from scrap wire from one of our local electronics plants. It is a simple process, and I attached the wires using white glue. The rear flying wires are a bugger to get in place if you’ve already attached the aileron struts, so leave those off until after you finish rigging it. It took about half an hour to rig the airplane completely with wing and tail bracing wires.

This is a new kit, and since I like the airplane, I decided to build a Monogram F11C-2 alongside this one for comparison. Surface detail on the RS kit is better, as is the interior. The engine has better detail. However, the Monogram kit is infinitely easier to assemble, and the detail is just about as good on the exterior. And the biplane arrangement on the Monogram kit is very simple and robust, since the cabanes and landing gear are molded into the fuselage sections. Over the years, many of us have picked up Monogram kits at swap meets, as they are still competitive, especially since the RS kit sells for nearly $30.00. I would highly recommend this kit, as it is accurate and of very high quality, but since you can either scratchbuild an interior or get one of the Starfighter Decals resin cockpit conversions for the Monogram kit (done by Alex Bernardo) for about $15.00, you could still build a stunning model of this airplane for less. In addition, there are a number of conversions that could be done from either of these kits, mainly of export or experimental variants, so this is an airplane that the serious modeler should want a lot of. Highly recommended.

Thanks to UMM-USA (Unique Master Models) and IPMS-USA for the review kit.

BFC-2 on display
Previous Next