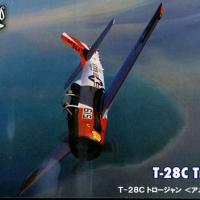 The North American T-28 was used by both the Air Force and Navy and was designed as a replacement for the old T-6/SNJ. It saw use in the American military from the 1950's until the mid 80's. In the end there were 4 variants, the A, B, C, and the counter-insurgency D models. Several other variants, such as the Fennec, were used in foreign service.

The T-28C, the subject of this kit, came out in 1955 and was the same as the B model except for the tail hook installed for carrier training and a slightly shorter prop. The T-28C had a Wright R-1820 engine and a three-bladed prop.

The kit came in a colorful box with the cover painting showing the scheme I decided to model, and with all three possible markings options on the back. Upon looking at the sprues, I was impressed. They had recessed panel lines and very little flash, but there are no part numbers on the parts so you need to look at the layout in the instructions to figure out what’s where. My sample had an extra left fuselage without the cutout for the tail hook.

Be careful removing the parts from the sprues, as the plastic is very brittle. I have a tiger saw which usually works great, but I still managed to break the tail hook, pitot tube, and control stick. I started my build with the cockpit – there was a fair amount of detail there – and I especially liked the feature of separate seat cushions which can be painted and dropped in place after the seats themselves are painted.

The cockpit floor had a large round lump which needed to be sanded away. The colors called out on the instructions are basic, just saying "use light grey" with no Federal Standard numbers to go by. There are no alignment pins for most parts, so some guessing is in order.

After the cockpit was built, I joined the fuselage halves and put what I thought was a lot of weight in the nose. As the build progressed, I realized it was not nearly enough, but by then, it was too late to add any more to the inside.

I hate tail-sitters, so I decided to cut off the round plastic knob which serves as the engine mount and fashioned a lead firewall and mount. In the end, it gave me the forward weight that I needed for the model to sit on its nose gear. But be careful – the nose gear is very fragile. I also liked the detailed engine, but the prop had a hollow spot in each blade which needed to be sanded out.

Since the overall plane is white, including the wheel wheels, I added the gear legs before painting. Please note the instructions, page 5 step 13, show the wheels on the wrong side of the gear legs, so I reversed them. Also, the large end of the centerline main doors goes to the rear.

I used Gunze Sangyo acrylic white for the overall paint and used Model Master insignia red for the trim, as I was afraid that using more acrylic might make the paint bleed or turn pink. Once the painting was done, it was time for the decals. There are over a hundred numbered decals and many have 2 or 4 per number. Although some are not used depending on the paint scheme, there are still a lot of them to apply. The decals are thin and fragile, but lay down nicely. They’re somewhat translucent and you can see shade differences through insignias, and the yellow writing which goes on the prop disappeared. You can’t see that when installed.

The clear parts are very clear. I dipped mine in Future out of habit and got some distortion. Even though this is a 1/72 scale kit, the canopy is similar in size to most 1/48 scale fighters.

Overall, I liked the kit. Major parts fit well, but there was some guessing as to where some stuff went. It took me longer than most other single-engine planes that I’ve built, but this is probably due to the complicated paint scheme and the large amount of decals.

When finished you will enjoy a respectable T-28. My thanks to MMD Squadron distributors for supplying the kit for review, and IPMS/USA for the opportunity to review it.