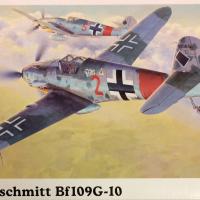 The Bf-109G-10 aircraft is rather unique by the fact that it was somewhat of a ‘Frankenstein’ aircraft put together with available resources at the time. The airframe consisted of a standard G model and incorporated a DB 605 D-2 engine. The reasoning for this was an attempt to create as little disruption to factory production of the Bf-109K’s.

There was a total of 2600 G-10 built after 1944 and one lone survivor resides in the National Museum of the United States Air Force in Dayton, Ohio.

The kit by Hasegawa was first released in 2004 and was just recently re-released. This kit consists of 6 sprues to build a Bf-109G-10 with the option of 3 markings: #1 2./JG300, Feldwebel Eberhard Gzik, Germany, October 1944 #2 3./JG 51, East Prussia 1945 #3 Unknown, Germany, early 1945. The assembly begins with the cockpit and has only 15 parts but the detail is adequate. You also have the option to include a pilot figure which I was going to incorporate him in the build but I opted to include some Eduard photo etch seat belts instead.

After the cockpit was completed the fuselage halves are put together along with the tail section. I was slightly worried about the front and rear fuselage joining and creating a step, but thankfully it did not and the seam fell naturally where one would be anyway. The wing top and bottom sections were then joined and at this point, I discovered I had forgotten to include the radiator faces prior to gluing the wings together. Note for next time.

After mounting the wings to the fuselage the remaining steps were rather simple, the cowl cover, propeller blades, exhaust, and landing gear. Once you get the fuselage and wings completed the kit wraps up fairly quickly.

At this point, I primed the kit with Alclad grey micro-filler primer and addressed any areas with filler. Thankfully there weren’t very many and very they were in very minor areas. At this particular point, I then started trying to figure out exactly what colors I should use for the 2nd version. In the instructions, they give you 2 colors to choose from, RLM 83 or RLM 66, and then for the top of the wings, they call out RLM 83 and FS34087 Olive Drab. As all Hasegawa instructions they utilize Mr. Color paints, but as I compared the Mr. Color jars of paint to my Model Master Enamel colors, the contrasts were vastly different. After some searching on the internet of other individual builds of the same scheme I decided to stray from the colors being called out and did what appeared to be the best match and utilized my Model Master enamel paints.

After the painting was completed I began with the decals. My most worrisome decal was the tail band and in having to deal with these bands in the past they never quite worked out. Typically I will make the attempt in painting on the bands but for the sake of the review, I continued with using the decal provided. Thankfully the tail band went on without a hitch. I wasn’t sure if it was dumb luck or that I’m just that good. I like to think the latter half.

One thing that I have discovered in successfully using Hasegawa decals in the past is by making sure the water is kept hot. For this I use a coffee mug warmer and a ceramic ramekin with distilled water. The decals just need a mere second in the hot water and they are ready to go.

After all the decals were applied and dry, I completed the kit with a light spray of Model Master flat coat overall and then removed the canopy masks. The remaining small parts and landing gear were inserted to complete the kit and the then given the obligatory inflight zoom across the modeling desk.

I enjoyed this kit and will definitely remember the next time to follow directions. I would like to thank Hobbico Hasegawa for supplying the example for review, and to the IPMS USA for allowing me to review this fine kit.

Painted and waiting on decals

Painted and waiting on final details