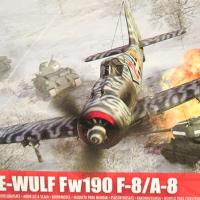 This is my first review for IPMS, and it involves one of my favorite kit manufacturers, Airfix. Like many folks my age, I built Airfix kits as a youngster and have been impressed with the quality of newly tooled kits they are currently releasing. To begin, I love the box art for this kit. It shows an action scene with the plane flying over some Russian tanks, but more importantly it provides reference material for painting the scheme shown on the box, which is the scheme I chose to paint on the model.

Upon opening the box, you will see the kit’s 4 sprue trees are packaged in a bag, along with a single clear parts sprue in its own separate bag. I always like it when kit manufacturers package the clear parts in a separate bag because it minimizes scratches during shipping. The instructions and decals are placed on the bottom of the kit. The instructions are nice because the painting instructions are shown in color with a separate black and white layout of the location for stencil/decals. The decal themselves are nice and crisp. You can see the small lettering on some of the decals.

Before starting construction, I had to review the instructions more closely because there are a lot of options shown in the panels. This is because this kit can build either the F-8 or the A-8 model Fw190. The F-8 was used more for ground support and tank killing. The instructions show the F-8 carried a bomb instead of an external fuel tank below the fuselage. Also, the F-8 was only equipped with 2 cannons on its wings instead of the 4 used by the A-8 model.

I started, as usual, working on the cockpit first. The kit comes with two instrument decals for the cockpit. Along with the decal, there are raised details on both sides of the cockpit tub along with raised details on the sides of the fuselage halves. I painted these details as best I could, and then added some dry brushing to further bring them out. One part of the cockpit build requires the use of a part from the clear sprue tree, the gun sight. This part is basically a clear box that needs careful paintwork to leave the angled clear piece, on the top of the part, unpainted in order to represent the HUD sight. According to the instructions, you need to glue this to the front of the instrument panel, but there is no obvious location where this needs to be attached. I instead glued the piece into the small notch on the right fuselage half where it would eventual need to be located, and not to the instrument panel.

Once the cockpit was done, it was now time to glue the fuselage halves together. This brings me to another issue I had with the kit. Each fuselage half had one-half of the engine cowling, and used extended tabs to glue the fuselage together. There are no alignment pins in the front part of the fuselage except for these tabs. The tabs on my kit were thick, and they did not allow the forward part of the fuselage to line up correctly. The solution was to sand down the thickness of these tabs so I could achieve a proper alignment. This alignment is very important, and will allow the parts that make up the rest of the engine area to easily fit while maintain the remainder of kit’s alignment moving back towards the cockpit area.

The rest of the build mostly went smooth. The bottom half of the wing is a single piece, and it includes a very nicely detailed landing gear bay area. Also, part of the wing assembly step is to glue in the cannons, which can be seen extending through the landing gear bay. As the rest of the cannons will now stick out of the wing, I would caution anyone building the kit to be careful after this stage, as the cannons will be easy to break off if you are not very careful.

Overall, I spent about 30 hours putting this kit together. It turned out very nice, and the winter camo scheme really stands out. Despite the alignment issues and the sanding requirements, this is an excellent kit. You cannot beat the price on this kit. It could be a slight challenge for a beginner, but the kit builds into a very nice representation of a Fw190 plane.

I would like to thank Hornby America for providing this kit, and IPMS/USA for the opportunity to review it.