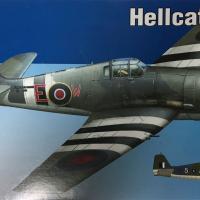 Eduard has released both the F6F-3 (Hellcat Mk. I) and the F6F-5 (Hellcat Mk. II) in 1/72. The kit is comprised of three sprues of parts molded in light grey and a circular sprue of clear parts. Two of the main sprues and the clear sprue appear to be common to all of Eduard’s Hellcat kits as they include a number of parts such as bombs, rockets and the night-fighter radar pod that does not apply to the Hellcat Mk. I. The canopy sprue includes a different windscreen and the blanked off panels behind the cockpit for the Hellcat Mk. II. The sprue with the fuselage halves also includes parts for three different cowlings. Finally, there is a separate sprue with just the top and bottom wing halves. I assume that this is different that the sprue in the Hellcat Mk. II kit as a review I read about the F6F-5 kit mentioned that the wings were pre-drilled for mounting the underwing rockets, but the wings in the Hellcat Mk. I kit do not have any holes in them for the rocket mounts.

As is typical of Eduard, construction starts in the cockpit and as this is the Weekend kit, the kit does not include any photo-etch for the cockpit. This is actually not a problem as the cockpit has nice raised detail and with careful brush painting, a very nice looking cockpit can be assembled. The kit provides a decal for the main instrument panel and the instructions advise you to paint the instrument panel sections flat black with interior green in between them. In comparing the decal to the panel, it looked to me that the instruments would disappear when applied over the black panels, so I put a dot of white paint in the holes for the instruments and then applied the decal over the dots. This gave the dials some nice depth. The kit also provides seatbelts as decals and the instructions advise you to install the decals before the seat is installed and the fuselage closed up – a very good suggestion. I left mine off until I applied the rest of the decals, only to discover that it was not that easy to apply then between the installed windscreen and the seat back.

Before you close up the fuselage, you will need to decide if you are going to install the centerline fuel tank as you have to open up a slot in the bottom of each fuselage half before they are closed up or you will be out of luck. I wanted to show the clean lines of the Hellcat and elected not to install the tank. The instructions also tell you to install the two clear parts behind the cockpit at this time. I decided not to as I knew I would end up with dust on the insides of them from sanding if I did, so I left them off until right before painting. You also must install the tail wheel when closing up the fuselage as it is sandwiched between the two halves. The instructions tell you to paint the tail wheel strut and actuator stainless steel, but in looking at pictures of British Hellcats, it appears that the strut and the actuator are the same color as the underside of the aircraft, so I ignored this instruction. Take care in matching up the fuselage halves to reduce the amount of seam clean-up you will need to do. I was a little sloppy and had to do some minor sanding and filling and this obliterated some of the nice panel lines under the fuselage.

When assembling the wings, be sure you select the correct wing gun insert as they are different and then make sure you install them in the correct wing or else the guns will not be pointing where they are supposed to. I put a dab of liquid glue under the inserts and set them in place. I then set the other wing half on to ensure the guns were correctly positioned while the glue dried. The guns are more robust than those on some other kits and I only broke off one of them twice. The wings and tail planes are a push-fit into the fuselage and despite my skepticism, they actually fit wonderfully.

The engine cowl is three parts: left, right and front cowl oval. Be sure to select the correct side parts as there are 2 wrong options. The parts fit well together and I only had to do a little sanding and filling, primarily at the sprue attachment points. The engine is nicely detailed and as a good part of it is visible through the front of the cowling, careful painting really shows.

The kit provides two types of tire treads, one with groves and the other with a cross-hatch pattern. There is no information as to which would be appropriate, so check your references for the aircraft you are building. Again the instructions say to paint the struts and the wheel hubs stainless steel and again I ignored this as the photos clearly show the struts and hubs to be painted the underside colors. The struts have nice solid attachment arrangements and can be used as a paint stand to keep the underside of the model off your painting area.

The kit provides separate main sections for the canopy – one for an open canopy and the other for a closed canopy. I opted for the open canopy so as to show off my painted cockpit. I dipped the canopy parts in Pledge Multi-Surface Cleaner and masked them with Eduard’s masking set for the Hellcat Mk. I, which I also received for review.

The kit provides markings for two Hellcat Mk. I’s – one operating from the HMS Emperor in the Aegean Sea in the fall of 1944 (with partially painted out invasion stripes) and a second one from the HMS Indomitable (you have to love the names of the Royal Navy carriers) in the Bay of Bengal in October of 1944. Initially, I planned to model the Mediterranean Hellcat, but I really did not look forward to the invasions stripes as by the fall of 1944 they had been partially painted out and this did not look like much fun in 1/72 scale. I also like the large over wing roundels of the Pacific Fleet Hellcats, so I opted for the Indian Ocean Hellcat. The kit instructions reference Mr. Color and Gunze paints, but I wanted to use Tamiya colors, so after some online research, I selected XF-21 Sky for the underside color and XF-24 Dark Grey and XF-13 J.A. Green, and I am pleased with the results.

Eduard’s decals are superb; they are very thin and snuggle down tightly with MicroSet and MicroSol over a PFM gloss coat. Unfortunately, the roundels are slightly out of register as you will note in the photos as there is a little white peeking out around the edge on one side of the decals. I do have two warnings about the decals – on the right side of the decal sheet there are over 30 different types of stencil decals, but nowhere in the instructions is there anything whatsoever about where they go! I ended up downloading page 19 of the instructions for Eduard’s 1/48 Hellcat Mk. I/II double kit in order to find out where they all went. Clearly the stencils were based on this kit’s decals as the numbers and the stencils matched perfectly – right down to the misspelling of “Watter” on decal I. The other issue I had with the decals is that the backing sheet appears to be a light blue color with white marbling on it, making it very difficult to see the white stencil decals until they were wet and the backing changed colors.

I really enjoyed this kit and it would make a nice first kit for a new modeler. There is also enough going on for a more experienced modeler to enjoy this build as well and the completed aircraft really looks like a Hellcat. Highly recommended.

Thank you to Eduard for the review sample and to IPMS-USA for letting me build it.

Cockpit up close and personal