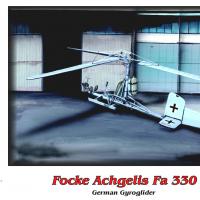 The Focke-Achgelis Fa330 was was a type of rotary-wing kite, known as a gyroglider or rotor kite. They were towed behind German U-boats during World War II to allow a lookout to see farther. Despite its advantages, the use of the FA 330 only resulted in a single sinking when U-177 used one to spot, intercept, and sink the Greek steamer Efthalia Mari on 6 August 1943.

The Allies came into possession of an FA 330 in May 1944 when they captured the submarine U-852 intact. After the war, the British government did successful experiments towing FA 330s behind ships and jeeps, but the development of the helicopter quickly occupied the attention of the military.

Fly models recently came out with two new kits in 1/32 scale, the Arado 234 Blitz jet bomber, and the Fa330 gyroglider. I am a big fan of odd and interesting German World War II aircraft and did not have one of their rotary wing craft in my collection. I couldn’t pass up the chance to give this kit a shot.

Fly starts with the cockpit, which is in reality just a control panel. CA Glue is needed and for this kit it is the only glue type I used. The control panel is made up of a plastic panel, acetate dials for the 3 instruments, photo etch panel cover, instrument bezels, attachment arms so you can attach the panel to the fuselage, and a resin control arm that is attached to the side of the panel. All go together well as the resin and photo etch are excellent in their detail and with no pinholes or deformities. Fly also has you scratch building instrument wires for the back of the control panel if so desired. Once that is complete, set the subassembly aside to let the CA harden.

Next in the build is the “fuselage”, if you can call it that, as it’s really just a tube frame. For such a small and light machine this is actually a fairly complex structure and takes up most of the build. One quick word of warning though, when cutting Part 2 from the sprue make sure you don’t actually cut off the horizontal part from the vertical tube. Fly had molded the horizontal part into the frame of the sprue and if you are not careful you can cut the vertical structure off without realizing that it’s actually a larger part, not just a vertical tube.

Step 3 in the directions has you taking the fuselage frame (part 5) and attaching support tubing. I held off on this and did step 4 first. This step attaches the resin control line pulley assembly to the control stick. I did this and set it aside to dry. I then went back to step 3 and saw that some of the support tubing needed to be installed before the control stick so those parts went on, but I left the rear support beams off (this was so I could get an accurate fit once the main frame was attached) and then I glued the frame to part 2, making sure that all was in alignment while the glue dried. Once the frame and tube assembly was dry I attached the rest of the support tubes from step 3 (some needed trimming to get a solid fit) and attached the earlier built control stick assembly making sure to fit it correctly per the directions. Fly puts the horizontal part of the stick assembly over a scratch built horizontal support beam. Another note here is that there is a lot of scratch building of support tubes and attachment handles. I used stretched sprue for most of it though I don’t know why Fly could not have added these items to the photoetch fret or the plastic sprue.

After all this was dry step 6 was to add the final parts to the fuselage frame. This involves adding the final tubes to the frame, including making two more from stretched sprue and adding the vertical and horizontal stabilizers. When all this was dried it was time to give it an overall painting of RLM 76 litchblau. I used my usual Testors Model Master Enamels to paint the gyroplane. After letting it dry for 24 hours I went back and looked over the first few steps and added onto the frame all the fiddly bits, hand painting them before attaching them to the model. These included resin pulley wheels, photo etch grab irons and, resin levers and other bits. Some were painted in RLM 76 and others in steel (the instructions call for “dark metal”) Step 6 also attaches the control panel, but I held off until completing the model to do this as it is a fragile connection of two photo etch parts and some CA glue.

Step 7 builds the landing skids. I built them and their cross support members first and then once those were dry gave it a quick coat of RLM 76. After that I attached it to the horizontal support tube of the “fuselage” and then attached the support beams to the frame. They then got a quick hand painting of RLM 76. Be sure to make sure the skids are centered on the tube, as the support beams won’t fit correctly if the skids are offset. Once all that is done add the photoetch steps/tie down cleats. Step 8 builds a canister and its associated holder. I believe this was to hold the parachute to bring the craft back down in a hurry if the U-Boat needed to dive. The Canister was painted RLM 02, the holder and photoetch tie downs RLM76, and the straps that hold in the canister were painted Linen. Once all the parts were dry, assembly was straight forward and the sub assembly attached to the main vertical tube. Step 9 attaches the rudder, but like the control panel it has a very small attachment area and was held off until the end. Step 10 adds the rudder bar and seat frame along with a photoetch lever all are painted RLM 76 with a red handle for the lever and black accents for the rudder bar. Step 11 builds the multi part seat belts. These are all photoetch and are very well done. The shoulder straps are made of 3 parts and the lap belts 4. These parts are painted linen, silver, and RLM 76. They really add to the kit and look great when finished. The last step for the fuselage is Step 12. In this step you add the seat back and cushion. The back is painted RLM 02 and the seat cushion is flat black. After those are attached the seat belts are added and the fuselage is complete.

The other major assembly in the build is the Rotor. This is made up of resin, PE and plastic parts. Step 13 prepares each rotor blade by adding a PE control arm and PE wire connector on the top of each blade along with a plastic control wheel. Step 14 assembles the Rotor Hub. This part is a bit complex and is made up of a resin hub, plastic wire guides and a PE triangle for the top of the guides. When building this piece make sure the PE part sits squarely on the plastic parts. I used slower curing CA glue on the hub to wire guide connection and faster curing on the PE to plastic connection then small bits of accelerator to dry everything once it was all in the right position. The final step is to glue the rotor blades to the hub; again CA is needed since it is a plastic to resin connection. Once all three blades were attached the sub assembly was given 24 hours to dry before paint. The assembly got an overall coat of RLM 76 and once dry each blade was given a small amount of black on the forward outer leading edge. This was done to give each blade its own identifying mark of flat white. One blade on the inner portion of the black, next in the middle of the black and the last blade on the outer edge, also on the control arms each blade was given a separate color band, one red, one yellow, and one white. Once all the paint was dry the blade assembly was attached to the vertical tube of the fuselage. The last step in the build was to add some small resin pieces to the underside of the rotor attachment point and a scratch built support wire.

At this point the build was pretty much complete. Fly provides a wiring guide if you choose to add the support wires for the rotors, control cables for the rudder and rotors, and the wires for the parachute to rotor connection. For the wiring that I did I used EZ Line and stretched sprue. I then added the control panel to the front of the craft and the rudder to the back.

Since most of the painting was done during the build there wasn’t much that needed to be painted save for some touch ups here and there. There are a few decals though to put on and they are 6 German crosses and four “no step” placards in German. After a coating of Testors Glosscoat, the decals were added and went on with very little issue. They are all clustered on the horizontal and vertical stabilizers. Once those were dry then the entire model got a coating of Testors Dullcoat and the build was complete.

Overall this model builds up into a fine example of a fairly unknown aircraft. It is not for the beginner but if you have worked with resin and photoetch and enjoy some scratch building then it should not be too difficult. In the end though I found it was a good challenge to my skills and allowed me to learn some new scratch building techniques. When the Fa330 is completed it will look very good on the shelf next to the more traditional aircraft in your collection.

It has been my privilege to review this kit and I want to thank Fly and IPMS for this opportunity.