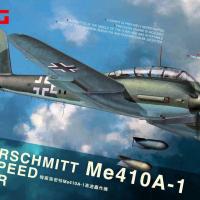 The Me-410 was a German heavy fighter/bomber used by the Luftwaffe during WWII. It was one of the very few bombers that could outrun Allied interceptors and bomb Britain. it was also utilized as an interceptor due to it's speed.

To start things off, Meng has done a superb job concerning detail and quality of this kit.

The kit is comprised of 289 pieces. Each sprue is individually wrapped, as are the photo-etched and clear parts. The big surprise to me was that there is zero "flash" on any of the parts. Well done Meng!

The build went smoothly, and the fit of all parts was relatively precise. I used almost no filler during the build, which I'm very pleased with!

I ran into only one small problem while joining the fuselage halves together. This pertains to photo-etched parts #s PE-1 and PE-2. These being the pilots' lap belts. In step #2 in the instructions, these are shown wrapping over the edges of the pilot seat. DO NOT wrap them over the edge. When I installed part #s D-12 and D-13 (port and starboard control panels) this led to a 1/16th inch gap between the edges of the nose windscreen (partM-3 in step 11). This was a somewhat simple, yet frustrating fix that involved a few hours of sanding and filing to be able to close up the gap. After that things progressed nicely, and the rest of the build went smoothly.

The only addition I made to the kit was a Quickboost resin control lever, part # QB48527,which had a little more detail than the one supplied with the kit.

The decals are by Cartograf, and like the rest of the kit, they are GREAT. I thoroughly enjoyed this kit, it was truly fun. I would not recommend it for somebody in the early stages of modeling due to the small parts and the photoetch parts which take a little experience.

Hats off to Meng for their fantastic rendition of the Hornet, and my thanks to them for the opportunity to review their kit. Well done Meng!