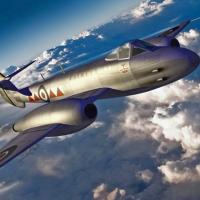 Mr. Neil Yan and the wonderful folks at HK Models deserve tremendous thanks for providing this review kit. I appreciate their work to bring new and unusual subjects to the scale modeling community. The IPMS/USA Reviewer Corps also deserves thanks for giving me the kit to review. I am only one member of a large staff in the Reviewer Corps, and I appreciate all the tireless team and individual work that goes into getting the material out to be reviewed and the finished write-ups published.

The Meteor appeared late in WW2 as a counter to the V-1 threat to England. It was the first operational Allied jet fighter, operated primarily by the RAF throughout its history. The design of the Meteor might seem primitive by today’s standards, but it truly was groundbreaking at the time. Many versions of the Meteor were developed, including stints as turboprop and ejection-seat test beds. HK Models chose the MK 4 version for their new kit.

The kit arrived in a nonstandard package with decals and an emailed set of draft instructions. Three large and one small medium-gray plastic sprues contain the bulk of the parts. A small clear plastic sprue held the three canopy parts and light covers. I did not receive an official box, but the HK website has an excellent painting of the Meteor in flight. The decals were protected in a clear acetate reusable envelope.

The engraving and overall detail is quite crisp. No mold release or flash was found anywhere on the parts. The canopy parts are quite clear and are not too brittle. In general the composition of the all the other plastic has a great balance of firmness, flexibility and opacity. Overall the parts have a very nice feel to them and there is no sense of anything being out of place.

The assembly steps can be roughly divided into cockpit, wing, and detail sections. Step 1 describes the cockpit assembly. The fuselage comes together in step 2 with canopy parts and other fuselage details being added in step 3. Steps 4 through 6 show the wing, flying surface, and engine assemblies. The tail surfaces are attached in steps 7 and 8, and the remaining steps 9 through 16 describe all the remaining details, including the gear, gear doors, wheels and so on. I followed the suggested assembly sequence and found no problems at all. The entire construction sequence was very straightforward without any surprises.

The cockpit assembly is straight forward, building up into a solid box with no unusual steps. The cockpit detail is very good, and silver dry brushing brought out the details very well. A quick web search of operational Meteor cockpits revealed several different layouts, and the HK kit represents them very well. A simple seat is provided and I was surprised to not see any harnesses provided. I hope any aftermarket detail sets will include harnesses with associated straps and buckles.

The nose weight is cast to fit tightly over the wheel well and forward of the instrument panel. Locater pins on the fuselage interior fit into matching dimples on the weight, so that when the fuselage halves are joined, the pins hold the nose weight firmly in position with no movement. I think this design is an excellent feature. Furthermore, the cockpit subassembly fits very well into the starboard fuselage half, making fitting of the halves a lot more fun. Be certain to open up the locator holes for the various antennae and the belly tank. The presence of these flashed-over holes suggests either more variants in the future, or flexibility for modeling different configurations of the Mk 4. The gun barrels are small representations of the entire length of the gun, but that is not a problem since the barrel ends are the only visible part anyway. Pay attention to the nose well parts. I glued one section in upside down!

The engines are integral to the wings and have minimal detail. The wing spar or splitter structure is very prominent and visible, but not much else can be seen. I am not familiar with the interior design of the Meteor’s engine, but it sure seem like there is a lot of open space available for detailing. It is possible to shine light through the entire engine chamber from front to back.. However the very positive side of this feature is the opportunity for a possible aftermarket engine or a scratch built equivalent. The engine compartments have covers that could easily be positioned open to show off any interior added details.

All control surfaces, including trim tabs, are hinged, a very nice touch! The airbrakes can be solidly positioned either open or closed, and actuator cylinders are provided. You will need to trim the mounting tabs slightly if you choose to show the airbrakes closed, but I found that to be a very easy step.

For all the remaining steps I found nothing unusual, in fact the construction was very straightforward and enjoyable. HK Models uses square to rectangular attachment “channels” between the part and the host sprue. I found this allowed me to trim very closely to the part with narrow cutters, leaving very little to sand or file for a good part fit.

Decals and Other Finishing

A single decal sheet is proved for two aircraft, one from the RAF 600 Squadron and an Argentina C-027. I chose to complete the RAF version with a simple Alclad finish and a grayish metal nose per the box art. If you prefer a more spectacular Meteor, the Argentinian version is quite colorful, appearing like a blend of invasion stripes and Mardi Gras. Wing walkway markings are provided for one aircraft. The warning letters are typically British with “DO NOT TREAD” versus “DO NOT STEP”.

The decals provided are very thin with a satin to matt finish. I discovered that I was unable to maneuver the decals much once they were applied to the aircraft surface. I used Microscale setting solution without great success. The decals are printed with very little clear carrier film, which is great. But the narrow walkway stripes were exceptionally difficult to apply, both as single pieces, and in straight lines. However, the dry decals look very good. The application process was not quite as simple as I expected. My suggestion is that you try applying the decals for the aircraft version you are not modeling on a finished surface of scrap plastic. I also recommend planning well for a one-shot slide-off from the decal paper. I caused the most damage to the decals by trying to nudge them into a final position.

This is a great kit that was nothing but fun through the construction stages. Many kits have a moment of panic or concern somewhere during construction, but this one did not. I really like the completeness of the kit, particularly with the well-designed nose weight. The kit appears to be well positioned for using aftermarket parts. There is quite a bit of discussion on modeling websites about after-market parts, but I have not found any leads or hints about upcoming releases.

The decals were the only stressful aspect of the entire project. However, the stress was my problem for not catching the difference in the decal sheet material compared to others I have used.

I am once again delighted with a HK kit build. The Meteor is a great addition to the blossoming large-scale model community. Thanks again HK Models and the IPMS Reviewer Corps, your efforts help make this hobby exceptional!

Port side top showing the narrow wingspan and the prominent engines

Port side top and aft showing the narrow wingspan, the prominent engines, and the distinctive RAF markings

Starboard side top and aft view showing the narrow wingspan, the prominent engines, and the distinctive RAF markings

Starboard side view straight across the wing showing the prominent engines, the nose gear, and the distinctive RAF markings

The cockpit “folds” up into a solid little box, with easy detail painting access before assembly. The top of the wheel well juts up into the cockpit floor.

The decal sheet arrived in one piece, but here is cut into three pieces for each of the two versions of the kit. The lower left block has common markings, such as wing walks. The RAF version in on the top and the Argentinian version are on the lower right and middle.

The prominent leading-edge wing spar is visible crossing the intake.

The flap hinge pins and wing sockets are visible on the trailing edge of the wing.

The main gear and well with associated hydraulics, struts and gear compartment covers are shown.

The elegant nose gear and well are shown, with completely hidden nose weight!

The upper red circle shows how I put the gear braces on the wrong side. The brace should be on the other side (interior). The cast nose weight is nicely done and fit snugly in position. The small gun barrels are highlighted by the lower red circle

The nose weight is plenty heavy enough to keep the nose gear firmly down. Small dimples in the both sides of the weight accept matching pins that firmly hold the weight in position in the fuselage interior.

The wide open engine compartment and intake baffles are visible. The prominent wing spar that crosses the intake is also shown. Don’t miss drilling out the locating holes for the belly tank. The holes are shown by gold marker circles.
Previous Next