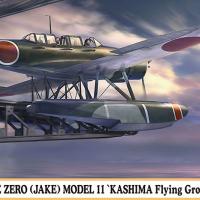 Nicknamed "Jake" by the Allies, the Aichi E13A floatplane made long-range recon a reality for the IJN (Imperial Japanese Navy) during World War II. E13As were typically launched by catapult off of ships, and many were used for kamikaze missions during the latter half of the war. Several E13A1 pilots were from the Kashima Naval Flying Group, which had begun as a flight training group in 1938.

When I first opened the box, and studied the pieces, I noticed that there were some small, light scratches in the fuselage halves. Also, from what I could see, there was a fair amount of flash along many of the parts. The kit has raised panel lines as well, these points all adding up to the fact that this is the older (1971) kit.

There is some great engine detail and it all falls together nicely into the fuselage.

The wings are two parts and they go together with only a little putty here and there. This wing assembly then fits right in to the fuselage, again with minimal putty.

The floats come in two halves, similar to the fuselage. They are molded with one set of struts attached. The instructions call for drilling a couple holes in the bottom of the wing, and floats for the other struts. After gluing these in place and letting them dry for a bit, the two float assemblies glue neatly into the wing.

The next part of the build is the catapult. This is where the modeler can really tell this kit was engineered in the 1970’s. It was quite a challenge to build. There are a lot of long pieces such as Parts 23, 22, 5, 3, 4, and 6 that did not want to fit at all! Some of them were warped as well.

Another part of the catapult build calls for running a thread inside the structure and around several pulleys eventually hooking onto the airplane carriage. The thread is to represent the cable that reeled in the carriage during launch and take-off. Then the airplane released from the carriage and went about its flight.

This is definitely the most challenging part of the build and it takes a lot of patience, tape and clamps! It does look very cool when it is completed and adds a lot to the model.

I started by masking off the Jake’s canopy to get it ready for priming with the rest of the model in Tamiya NATO Black. This dark color provides a nice shadow coat. Then I proceeded with Tamiya White in some areas to lighten the top coat and give it depth.

The next color applied was the IJN Gray on both the undersides of the aircraft and floats. After the gray was dry, I used blue masking tape and cut out a wave pattern for masking to stick to the side of the fuselage. Now, when the IJN Green is sprayed, the tape will create hard edge wave pattern. After the cowling was painted black, I sprayed the whole model with Future for a glossy, clear coat.

The decals were applied with ease, and Micro Sol was soon brushed over them so that they would sink in to all the recesses. Another gloss coat was applied ahead of the washes.

Only a black oil wash was given to the Jake. A few chips and streaks and I called it done. I did not want to go too overboard on the weathering.

The entire catapult was painted Dark Gray and a black wash was applied. Then, some light silver dry brushing to highlight the sharp edges.

This was a very fun and interesting model to build. I love float planes very much so it was a great experience to build this kit. Academy has done a great job engineering this kit, even though some of it is from the 1970’s! The only tricky part of the whole build was the catapult.

Thank you to Hasegawa-Hobbico Models for providing this kit for review, and to IPMS USA for giving me the opportunity to build it!

Aircraft on kit-supplied catapult
Previous Next