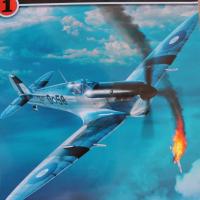 Nearly every historical modeler and historian is thoroughly familiar with the British Spitfire fighter, which probably did more to help the Royal Air Force achieve victory over the Luftwaffe than any other aircraft. However, less publicized is the role of the Spitfire as a naval, carrier-based fighter, replacing older types including the Gloster Gladiator biplane, Fairey Fulmar two seat fighter, and Sea Hurricane, which were in Royal Navy service at the beginning of the war.

Looking back at the historical situation, it is understandable why the Royal Navy leaders wished to have an aerial superiority fighter for its carriers, and in the Spitfire, they felt they had a logical candidate. However, it didn’t turn out exactly as they had hoped, as a carrier-based fighter requires some features not associated with standard land-based fighters. For example, what would have been the result if the U.S. Army Air Corps had begun development of carrier fighters for the Navy based on the Curtiss P-40, Republic P-47, or even the North American P-51 “Mustang”? This is basically what the British did with the Spitfire, which involved taking a highly successful fighter and adding features such as catapult equipment, folding wings, and carrier arresting gear, as well as the usual engineering equipment and developing a fighter under the stress of wartime pressures. With the Spitfire especially, the plane had gone through an evolutionary process involving specific improvements in armament, powerplant, superchargers, and aerodynamic features creating a number of “Marks”, or production models , which differed from one another in many ways.

One factor the author brings out, is that at the beginning of the war, the Royal Navy was attempting to replace their outmoded carrier-based fighters with American-built Grumman F4F Wildcats, which they called Martlets, and these were being delivered in addition to U.S. Navy requirements. After Pearl Harbor, those deliveries ceased for a while, causing a crisis within the Royal Navy which resulted in the development of the Seafire. As the war progressed, the Americans eventually began delivering more Wildcats, and later Hellcats and Corsairs, but these never came in the numbers required by the British. In addition, the U.S. delivered numbers of Grumman TBF Avengers, but even then, the Royal Navy continued to use the Fairey Swordfish and Albacore, as well as the Blackburn Skua, although replacing them with small numbers of Fairey Barracuda and Firefly types. Many of these newer types continued in use after the war, and some, including late model Seafires, were used at the beginning of the Korean War.

By 1940 and 1941, it was firmly decided by Royal Navy leadership that the Spitfire would be the best shot at developing a state-of-the-art carrier based fighter. The standard Merlin-powered Mk. V was the basis for this development, and a standard Mk. V was selected for conversion to a carrier-based fighter. A number of standard Spitfires were transferred to the Royal Navy for conversion to Navy standards and for training, but the development of an actual Navy prototype conversion was another matter. Tailhook and catapult spools were an easy matter, and the addition of these features allowed them to begin evaluating the aircraft for carrier operation. One major problem was the short range of the Spitfire, which resulted in additional fuel. Problems began to arise, mainly those of stability due to the additional equipment installed. The airplane landed a bit faster than standard service types, and pilots would have to be trained to counter the different flying characteristics. Many were lost in carrier landing accidents.

The Mk. Ib was the first Seafire to enter service, along with the similar Mk. IIc. The Mk.I was produced by converting existing Spitfires, while the Mk. II was manufactured by the factory, with attention given to specific requirements for a navy fighter. A number were issued to various fighter squadrons, with pilots and ground crews gaining experience in the type’s operation. Finally, after training, the squadrons were deployed on various carriers for service in the Mediterranean, and their first action was during Operation Torch, the invasion of North Africa involving British and American forces, where the type was only moderately successful. More losses were due to accidents than from combat, and the lack of folding wings was a severe problem in handling the airplanes on a carrier deck.

Later, more Seafire Mk. II’s were ordered from Westland, and when some of them were equipped with newly designed folding wings, the Mk.III was born. The Mk. III suffered from some control problems. Despite these, and with the addition of a four bladed prop, the plane entered service. During the middle of the war, many Seafires were used on carriers that were escorting North Atlantic convoys, and they achieved moderate success in this role. Later, towards the end of the war, Seafire units were transferred to the Far East, and they were quite successful against the Japanese at the end of the war.

The last part of the story of the Seafire was the postwar development of versions equipped with the Rolls Royce Griffin engine and five bladed propellers, with later variants using six bladed contra-rotating props. These soldiered on into the late forties, when the development of jet powered navy fighters, hastened the end of the Seafire’s service career. Apparently, only one Seafire has survived, and it is displayed in a museum in England.

This book provides an interesting and accurate description of the development and operational career of the Supermarine Seafire. The author gives a good account of the origins and development of the design, and its wartime service. A major feature is the profuse collection of photos of the aircraft, and the excellent color profiles showing the basic variants and their color schemes. As a modeler, I was a little disappointed in the fact that there are no three-view drawings, as these would have helped to distinguish the various Marks for modeling purposes. Other than that, it was very interesting reading, and is a very useful reference for modeling the various versions of the design. The photos and drawings are first rate, and there is as much information in the book as any modeler could require. I would highly recommend this book to anyone interested in this aircraft.

Thanks to Tempest Books and Casemate for providing the review copy.