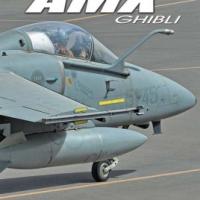 The AMX International AMX is a ground attack aircraft jointly developed by Brazil and Italy. The AMX is designated A-11 Ghibli by the Italian Air Force and A-1 by the Brazilian Air Force. The Italian name, "Ghibli", is taken from the hot dry wind of the Libyan desert.

During the early 1970s, Italian manufacturer Aermacchi conducted a design study on a prospective light ground attack aircraft, which was given the designation of MB-340. During early 1977, the Italian Air Force issued a requirement for 187 new-build strike fighters, which were to replace its existing Aeritalia G.91 in the close air supportt. During 1980, the Brazilian government announced that they intended to participate in the program in order to provide a replacement for the Aermacchi MMB-326. As a result of a memorandum between Italy and Brazil for the type's joint development in 1981, AMX International, an Italian-Brazilian joint venture, was formed to develop, manufacture, and market the aircraft.

The text is in Italian and English. Almost all the pages include color images of Italian Air Force AMX in flight or on the tarmac. There are two pages of color profiles of the standard camouflage scheme, for both single- and two-seat versions.

This is a brief discussion on the history and philosophy behind the need for the AMX multi-purpose aircraft.

In the mid-70's the Italian Air Force began its planning for a multi-purpose aircraft to replace its aging fleet of G.91's and F-104G's and to supplement the Panavia Tornado. Several then current aircraft were evaluated, however none met the criteria required. During the defination phase of the design planning there were contacts between the Italian Air Force and the Royal Swedish Air Force. In late 1979 the Swedes abandoned their involvment to focus their efforts on what would later become the JAS-39 Gripen. Almost the same time the Swedes were leaving the project Brazil expressed interest as a co-venture partner.

This section covers the various upgrades of the aircraft. Weapons and avionics are detailed.

In Service with Italian Air Force

This is the major portion of this publication and covers the acceptance, training, air bases and crashes. Along with the crashes were the inevitable grounding of the aircraft to resolve engine issues that had lead to the accidents.

The AMX particpated in the air wars over Bosnia, Afganistan and Libya. In all theaters the AMX accounted itself well and delivered various ordinance on targets.

At the time of the publication there was only a single model kit available: the Polish-made Warrior Model kit in 1/72nd scale. I checked the publication date and found this edition was first published in 2012. Since that time several main stream kit manufacturers have made kits available. The Warrior kit is a resin kit. This chapter deals with the assembly and painting of that kit. An image of the completed model is shown on page 60.

Two pages of up close images of various exterior details that will prove beneficial to scale modelers.

Technical Data, weaponry and serials-we have a single page of three schedules that address technical data, armament and sensors, and aircraft serial numbers. The armament and sensors data should prove informative for those who wish to model an Italian AMX Ghibli.

Acknowledgements and Bibliography-These are primarily Italian sources from 2012.

Hobby Boss and Kinetic both now offer 1/48th scale kits of the AMX in single- and two-seat configurations. Kits are available as ground attack or trainer versions with plenty of underwing stores. I built the Kinetic single seat version kit number 48026 several years ago. If I had this publication on hand I would have added more detail to the build. The photos contained within this publication offer a wealth of detail that modelers will appreciate.

I found the various color images very informative for details and special colors that would be of interest to the scale modeler. The addition of various underwing stores is also a valued resource for the scale modeler. This publication is a great reference for those interested in adding an AMX Ghibli to their collection. Very highly recommended.

My thanks to Casemate Publications and IPMS USA for the opportuunity to review and add this publication to my reference library.