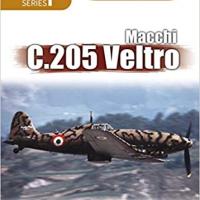 My take on the Italian aircraft industry during WW II was they were usually playing catch-up with the Allies. The main Italian fighter at the start of the war was the FIAT CR.42, a biplane even though by 1940, other air forces had moved away from them. As their aircraft designs modernized, the Italian industry had difficulties producing suitable engines. The answer was to import German engines, mainly from Daimler-Benz. Their DB601 engine with 1075 HP, powered the Reggiane Re.2001 and the Macchi C.202 Folgare. These designs were soon outclassed by Allied fighters, so new designs with more powerful engines were needed. Aeronautica Macchi answered the call by mating the newly available DB605 engine (1475 HP) to the C.202. The resulting aircraft was the Macchi C.205 Veltro (Greyhound).The new fighter had a different nose profile and externally mounted, cylindrical oil coolers, but retained the modest armament of the C.202.

Mr. Skulski traces the development of this aircraft and its operations throughout the war and the years after the end of hostilities in Europe. The main sections of this work are:

He traces the troubled production runs, upgrades to the machines, and their various missions. A very interesting portion describes actual operations against Allied aircraft. Owing to the fact the Italians were always vastly outnumbered, successes were limited. I was surprised to learn a captured C.205V flew reduce missions for the Australians in North Africa. The Luftwaffe also briefly used this aircraft in Italy and the Syrians and Egyptians flew it after the war. There is some speculation it also flew with the Croatians and Swiss.

The author supplements the text with numerous vintage B&W photos, technical drawings from the aircraft’s maintenance manuals, and in the “Museum Exhibits” section, color photos. These latter photos are aimed at the modeler because they are close-ups of the cockpit, engine, wheel bays, and exterior surfaces. There are several pages of 1/48 scale line drawings and one page of 1/72 drawings for us ‘Braille Scale” modelers. Finally, the book closes with 16 pages of beautiful color profiles.

I enjoyed reading this book and can strongly recommend it to any modeler interested in the Macchi C.205V or the WW II Regia Aeronutica in general. There are several available kits of this Italian fighter in 1/32, 1/48, and 1/72 scales. This book would be a tremendous reference for detailing and painting any of those models. Reading it inspired me to dig out my old 1/72 Supermodel kit. My thanks go to IPMS USA and MMP Books for a chance to review this book.