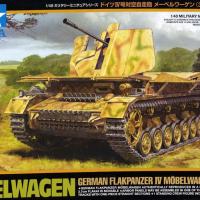 Since man’s first coordinated attempts to go airborne for the purposes of warfare (balloons used for artillery spotting in the Franco/Prussian War of 1871), opponents have speedily attempted to counter the aerial threat with ground based anti-aircraft weapons. And when the pace of war sped up, so the need for mobile AA weapons increased. During the opening phases of WW2, German ground forces enjoyed air superiority, and the need for mobile AA equipment was not a high priority. But by 1943, it became clear to German commanders that mobile AA weapons to keep pace with and offer protection for their mechanized units were required. Two existing tank chassis were used to provide the bulk of the Flakpanzer weapons, those being from the Panzer 38t and the Panzer IV vehicle series. The first Panzer IV chassis vehicle was the Mobelwagen, or “Moving Van,” initially mounting a quad 20mm Flak gun unit, but for the production series of vehicles, mounting a single barreled 37mm Flak 43. These vehicles were produced from March 1944 to at least March 1945, with a total of approximately 240 vehicles rolling off the production lines.

Way back in the 1970’s, Bandai released a 1/48th scale kit of the prototype Mobelwagen with the quad 20mm Flak gun unit, and these can still be found on eBay for about the same price as this new Tamiya kit under review today. But unless you particularly want to build the prototype of the Mobelwagen, the Bandai kit is best left for kit collectors. The Tamiya kit is leagues ahead in terms of overall detail, and in terms of ease of construction.

This is the third 1/48th scale military vehicle release by Tamiya covering Panzer IV chassis vehicles, the previous two being a Flakpanzer Wirbelwind (kit 32544) and a Panzer IV Ausf. J gun tank (kit 32518). As with the previous two models, this new Mobelwagen kit is molded in standard Tamiya tan plastic of very high quality, with the parts exhibiting a crisp level of detail, and is flash-free. Ejector pin marks in visible spots are kept to a minimum, and like all previous kits in this series, the model comes with injection-molded link and length tracks utilizing the same plastic as all the other kit parts. Unlike the previous two Panzer IV kits, this one incorporates a newly tooled one-piece plastic hull tub, whereas the previous kits came with cast metal tubs. The fit of all the parts is exemplary.

Construction of the model, as mentioned, is simplicity itself, and the part fit is as expected from Tamiya: top notch. Tamiya starts you off assembling the lower hull, and as mentioned above, this time around we are treated to newly tool plastic hull, part R1, rather than the previous cast metal hulls. This makes gluing things together that much simpler, and for many, less fearsome, as regular plastic cement can be utilized throughout construction rather than needing to incorporate super glue into the build (Section 1 of the instructions). Two features to note with the hull construction: Tamiya correctly gives the modeler the later all-metal version of the track return rollers vs. the rubber-rimmed return rollers on the Mobelwagen prototype (Section 3). Tamiya also supplies in this kit the non-standard (but still perfectly appropriate) horizontal Flammentoeter exhaust mufflers (parts G7 & G10, Section 2), rather than the standard horizontal muffler, the latter of which appears in their Panzer IV Ausf. J and Wirbelwind kits.

As mentioned, the kit comes with the standard link and length track system, and these tracks fit very well, provided you carefully follow the assembly sequence noted in Section 6. The fit of the two-part road wheels to the main hull (Section 5) is solid, making correctly lining up these parts simple. All the onboard tools, such as shovels, pick axe, and jack, are separate parts, and well detailed for the scale. The jack is a three-part unit, while the separate Bosch headlight is a two-part unit. I added the wiring for the light from thin lead wire. Tamiya also simplified the rear hull engine deck by molding the lift handles as part of the engine deck, Part R3, Section 7 (this seems standard on their kits in this scale). I carefully sliced off the molded-on handles and sanded the offending area smooth, drilled mounting holes, and super glued raised handles made from copper wire of the appropriate diameter.

The four side armor plates that provide protection for the gun and crew are nicely detailed, but there are a few visible ejector pin marks on the main panels that need filling with putty and sanding smooth. So, too, on the gun shield, part S35. Thankfully, no detail should be lost during this process. In some period photos of Mobelwagens, arms length hooks can be seen attached to the side armor plates and the corresponding “U” shaped mounts that they hook into. These were apparently to help hold these armor plates in position. The Tamiya kit omits these, but they don’t appear from photos to have been standard on all Mobelwagens, so their omission apparently isn’t an error, as such. They wouldn’t be very difficult to fashion out of some suitable lengths of copper wire, should the modeler wish to include them on his model. (They aren’t present on the old Bandai kit, either, FYI.)

Tamiya provides the modeler with options when it comes to the positioning of the armor plates: A/ Horizontal Firing Position; B/ Traveling Position; C/ Anti Aircraft Firing Position. Make your decision as to which mode you want your vehicle to be in, and use the correct parts in the correct positions, as appropriate: Sections 13 through 16. Following this, one comes to the construction of the gun and its mount. This is a well detailed part of the kit, and if the modeler test fits the parts carefully as they move through the six construction sequences, no difficulties should be encountered. One addition not included in the ki, but which I included on my model, was adding some PE mesh screen to the spent cartridge basket, parts S31/32/33/34/41, in Section 21.

I decided to go all-out on the painting and weathering of this model, giving it the “Spanish School” treatment (aka, the “beat to hell” approach!!). Given the complexity of the armored plates and the gun and its mount, I decided it would be best to paint this model as a series of sub-assemblies. Each was given a coat of Mr Surfacer 1200 as a primer. Then, the first of these, the lower hull without the road wheels or tracks attached, was painted Tamiya XF60 Dark Yellow. I wanted to apply judicious quantities of mud to the vehicle, and having the tracks and road wheels in place while trying to do this would be a pain. The mud was applied by mixing up some Plaster of Paris, together with some suitably colored earth-toned pigments, and splattered onto the lower hull areas via an old paint brush for picking up the mud, and my airbrush to “blow” or splatter the mud from the brush onto the model. This worked like a charm, just as in all those AK Interactive DVDs I have been watching for the past year! Once the mud application was dry, I glued on the road wheels and the link and length track, the latter having been first pre painted with Tamiya’s new paint color, Dark Iron XF-84. This is perfect as an initial color for tank tracks.

I then painted all the other sub assemblies with an initial application of XF-60 Dark Yellow, then lightened the first mix with some XF-57 Buff and did some panel fading. When dry, I glued the upper hull to the lower hull – with the fit being incredibly precise, it was a marvel to behold! I then thinned down first XF-64 Red-Brown and then XF-61 Dark Green, and created a mottle camouflage pattern on the upper hull and the exterior of the armor plate gun housing parts. Decals were then applied following a coat of Tamiya XF-20 Gloss Clear to seal everything. Tamiya only provides decals for one vehicle, listed as “Division Unknown, Summer, 1944 France,” – in fact, all you get are two German black and white crosses! However, they worked just fine, and when dry I airbrushed over them with some additional XF-20 Clear Gloss.

Once the decals were in place and sealed, I sprayed a coat of Vallejo clear matt acrylic over all the parts, and then set to work weathering the model. First, I did the paint-chipping application using a finely pointed brush and a suitably dark gray color from the Vallejo acrylic range. Then I applied an enamel filter from the MIG range of products, listed as suitable for German three-tone schemes. Once this had dried thoroughly, I applied a dark brown oil wash to help pick out the model’s details. And when this was dry, I applied rust to the tracks and various parts of the remainder of the model for added interest. Once dry, the weathering applied so far was sealed with another layer of Vallejo matt clear acrylic.

I then took the sub assembly which included the gun barrel of the Flak 43, masked the non-barrel parts, and sprayed a coat of Testors Gun Metal Metalizer onto the barrel, and when it had dried a bit, gave it a buffing with a soft piece of old cotton t-shirt. Then all the sub assemblies were very carefully assembled. Once the glue for all these had dried thoroughly, I applied some road dust (dilute Tamiya XF-57 Buff) to all the surfaces, less to the upper ones and more to the lower. Then I mixed up some wet mud (a darker color than the previous application of mud) and conservatively splattered this onto the lower hull and tracks, using the same method as earlier for the mud effect. Finally, I took an artist’s graphite pencil and ran it across various corners of the model, raised surfaces like rivets, and on the raised surfaces of the tracks. Voila, a simply wonderful model, in my humble opinion!

I can’t recommend this model highly enough for anyone who wants a fun, leisurely build of this interesting vehicle. My sincere thanks to Tamiya USA for providing IPMS/USA with this review sample, and IPMS for allowing me to review it.