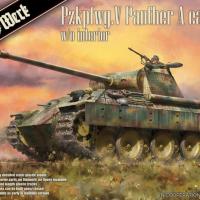 Let’s face it, interior kits with their massive part-count aren’t everyone’s thing. A model retailer once told me that armor kits without an interior outsell those with one by almost 10 to 1. Cue Das Werk to the rescue with reboxing of Takom’s Panther kits with no interior sprues, a reasonably sized box, manageable part count, and correspondingly manageable price tag. This kit builds into a sharp model of a Panther Ausf A with no issues and engineering that is a joy to behold.

The Panther tank, officially Panzerkampfwagen V Panther was born out of a project started in 1938 to replace the Panzer III and Panzer IV tanks. It was used on both eastern and western fronts from mid-1943 to the end of the war in May 1945.

The details on this kit are excellent. In fact, for a kit of this abbreviated scope (i.e., no interior) and price, I haven’t seen better. The fact that it was culled from a kit that originally came with a full interior means you receive top notch detail on things like hatch interiors and periscopes. The hull and turret have a sublime rolled steel texture that is beautiful to behold. The weld seams are in-scale and understated like they should be. The tools came with molded-on brackets which were very nice and only a slight step down from aftermarket photoetch or 3D printed replacements. The commander’s cupola and bow machine gun barrels need to be drilled out. Two photo-etch fret comes with engine-deck screens. The tracks are link-and-length tracks which are probably the most trouble-free sets I’ve ever built. The guide horns need to be installed separately which you’d think would be a pain, except for the fact that they are attached to a guide rail which means you can install up to 26 guide horns at a time, all perfectly uniform and aligned. I was able to install guide horns on both track runs in exactly 22 minutes and 42 seconds according to my stopwatch.

I was thoroughly disappointed at the lack of zimmerit since the A models were built during the time Zimmerit was applied at the factory, and all but a few wore it. I fixed that problem with a beautiful set of paper zimmerit from Monroe Perdu Studios (ttps://www.monroeperdu.com/Zimmerit-Sets_c_18.html), but that’s a story for another review.

This kit goes together very easily and quickly built out of the box. Das Werk provides a jig for the road wheels so it’s possible to build the running gear, tracks and all, perfectly aligned before you even mount them on the hull. It would be hard to have a more perfect fitting and aligned suspension on a scale model kit. In much the same way, the armor periscope covers on the commander’s cupola are all molded in position on a circular sprue so they can be installed in one step. Little touches like this tells me that Das Werk (Takom) care about whether building their kit is an enjoyable experience for the modeler. Kudos to them.

The seams for the turret and hull are largely hidden by weld seams. There were some ejector pin marks on the inside of the hatches which required some attention, but on the whole, there was little or no cleanup to worry about.

The fit was excellent. There is very little to say here, except that this kit could give even the best Tamiya kit a run for its money. I had no issues, and it was a true pleasure to build. No cleanup was required with the exception of a few seams on the wheels and gun barrel.

Das Werk gives you their standard, well thought out, well-illustrated instruction booklet that tells the story in pictures with no text to get in your way. It is very difficult to get lost with these directions.

Full color painting and decal placement instructions for three variants (Italy 1944, Poland 1944 and Eastern Front 1944) are found on the last few pages. The decal sheet is very small, with only turret numbers and three Balkenkreuz. No unit markings are present, but there are lots of aftermarket options available.

The decals have a nice flat finish, are agreeably thin, and nestle down over zimmerit with moderate encouragement from Slovaset.

This kit was very pleasant to build. It gave me no problems and I think it’s safe to say it’s easily within reach of even less experienced modelers. There were a lot of interesting and imaginative features to how the kit went together that made it more interesting to build than your average shake-and-bake armor kit. There is plenty of potential to add aftermarket parts and upgrades, even if you don’t want to tackle a full interior.

Many thanks to Das Werk and IPMS USA for the review sample.