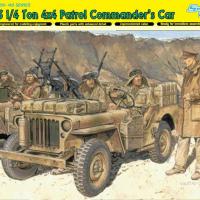 Starting at step one; Building up optional tires. Steps two and three; Chassis, suspension, drive-train and exhaust system. Steps four, five and six included building up the engine and radiator along with adding a lot of the major body part items. Steps seven and eight cover more parts for the interior of the jeep. The last steps, nine thru twelve, finish up by building then adding the jerrycans and machine guns followed by mating the chassis,engine and body. Last were the crew figures as optional items. I encountered no problems in the construction or fit of the model and it only required minimal clean up using a sanding stick.

It's a great kit with plenty of photo-etch. My only gripe is that when viewed from the bottom some parts have no bottom, so I used plastic card stock to cover the offending openings. I recommend it to any modeler.

Thanks To Dragon Models USA and IPMS for the chance to review such a nice model kit.