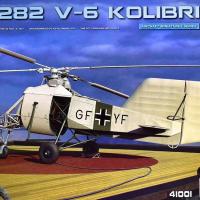 In 1942 German Navy began testing of FI 282. The FI 282 was found to have good handling in good and bad weather, with stable flight characteristics in all conditions, whilst also being quite maneuverable. Several tests involved rough conditions at sea including landing in harsh conditions which the Kolibri proved itself a capable and reliable machine.

In 1942 a total of twenty prototypes were in testing. Based on the prototypes’ success, plans to manufacture 1000 helicopters were approved; however, these were never built in such numbers due to the allied bombing of the Flettner and BMW factories.

By 1943, twenty-four Fl 282s had been built, with twenty used by the Kriegsmarine for convoy protection in the Mediterranean and Aegean seas. Unfortunately, little is known of the operational deployment of the machine during that time. It is also known that Luft-Transportstaffel 40 had at least three Fl 282s (and also three Focke Achgelis Fa 223s) at its disposal, based at Ainring in April 1945. It was possibly one of this unit’s Fl 282s that flew Gauleiter Hanke out of besieged Breslau just before the capture of that city.

Only three FI 282’s were discovered by the Allies in a serviceable condition at the end of the war. All of the others had been lost in service or destroyed or disassembled to prevent capture of their technology. Of these three machines Fl 282 V15 and V23 were taken to the USA, with a third FI 282 V16 being claimed by the USSR. Examples known to have survived are the Fl 282 (c/n 28368) at the Cranfield Institute of Technology, and the Fl 282 V23 at the United States Air Force Museum, Dayton, Ohio. The one which was captured by USSR is displayed in Moscow at the Aviation Institute (National Research University).

This kit is the first of MiniArt Models new Aircraft Miniatures Series. The kit contains 185 total parts with the bulk of those (172) being molded in light gray plastic. The remaining bits are a couple of clear lenses and eleven pieces of photo-etch. As the pilot station was kinda out there among God and everybody, a safety harness/seat belt was, no doubt, much appreciated. I can only imagine but the exposed pilot station probably made flying this thing a bit on the breezy side. Not to mention the noise! Where are noise canceling headphones when you need them?

MiniArt Models provides one marking option in two color schemes: overall light gray or overall dark green (RLM 71). Included as well are some decals for the instrument clusters and a few warning and fuel placards. The decals are printed in Ukraine and are beyond thin but adhere beautifully and I had no issues with any of them, even the instrument faces.

Of the 172 plastic parts, ninety of them are for the detailed engine and rotor transmission. The engine assembly sequence begins with a separate engine block to which are added individual cylinder heads and push rods. Engine detail is further enhanced with separate exhaust piping for each cylinder. All of this gets attached to a bulkhead to which is added the exhaust collector piping.

An aspect of this kit to consider is that some of the inside surfaces of the parts (engine covers and such) will be visible and some of those will need some attention (removing injector pins marks, etc.) and painting. None of this just fixing the model to a base and never mind that ugly seam on the bottom that no one will see. That's me, but anyway...a lot of the detail is visible and deserves attention.

All that aside, the FL Flettner is going to be a tail-sitter unless you add some weight to the front end. This presents a problem as there aren't many areas where one could add some weight. So maybe attaching it to a base isn't such a bad idea after all.

One deviation from the assembly instructions that I used involved the propeller shroud (part #C15). The instructions sow to attach the part prior to connecting the forward cockpit section (steps 16-19). I found the rigidity of the entire structure (rear fuselage assembly and cockpit assembly) made installing the shroud much easier.

The detailed rotor transmission assembly is next and encompasses some thirty odd parts. Both assembles are then mounted mid-point on the fuselage. Both the engine and rotor transmission are exposed so all that detail won't be lost behind some fuselage maintenance panels. If you choose to be a show off, some of those panels can be shown open. And why not. The engine, in particular, is worthy of a little time in the limelight.

You may wish to paint the engine parts and transmission before adding it to the fuselage as it will be inaccessible afterward. That same thought process won't be wasted on whether or not you choose to paint the airframe separately before said parts are added. Once you get the engine and rotor transmission attended to the rest of the build is all downhill. Well, at least not so fiddly.

The tubular airframe of the Flettner is nicely represented as are all the mechanical control linkages. On the actual airframe the control linkage was all done with long push rods. Do be careful removing these bits from the sprue. MiniArt Models looks to have molded these parts in-scale and their delicate nature may lead to some breakage. I managed to break one of the vertical stabilizer control linkages just handling the sprues. But all the control linkage detail adds quite a bit to this kit, which is one of the reasons I chose to display my Flettner sans engine covers/panels.

Speaking of engine covers, there are a few parts that are not germane to this kit and those are noted in the instructions. A couple of parts (C13/C16) that are appropriate for this craft aren't mentioned in my copy of the assembly instructions. Both parts are for the engine or transmission covers/panels. Using some of my crafty structural visualization skills (a real thing), I figured out where they go. (See photos.) This model is of a prototype after all, so leaving off the odd bit here and there won't matter that much, except to purists.

There is a small amount of photoetch included with this release, none of which proved the least bit daunting to install. Among those items are some detail for the engine covers, control linkage on the rotor transmission, pilot foot stirrups, and a very cool seat harness/belt.

MiniArt is to be congratulated for molding the rotor blades with the appropriate droop. One slight concern might be that the attachment arms are a tad delicate and could present some concerns if you are as ham-fisted as I. Attaching the rotors might best be saved 'til last. Don't be twirling the blades around as you flyyour Flettner through the house. It is, however, OK to make that 'zwoop zwoop' noise.

The FL 282 Flettner V-6 is a beautiful model with oodles of small detail. There is a price to be paid for that detail in that assembly can be a little fiddly and some parts are delicate. This is not a kit for the faint of heart or novice. But if you don't mind kits thattask your skill set a little than this FL 282 from MiniArt will make a worthy addition to your collection and is a must for any whirlybird fan. A braver man than I could even add some wiring to the instrument clusters and install the odd bit of piping to this beasty and have themselves a real show stopper.

My thanks to MiniArt and IPMS/USA for the review copy.

P.S. MiniArt is releasing an additional variant of the FL 282 Flettner, the V-21. This was the prototype fitted with different style engine/fuselage covers and additional fuel tanks.

Rotor transmission with hubs
Previous Next