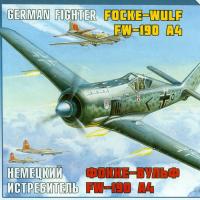 The Focke Wulf Fw-190 is probably one of the most modeled aircraft in any scale, mainly because it was such an excellent design and was produced in very large numbers during World War II. Although sources vary as to the number produced, slightly fewer that 1,000 of the A-4 type appear to have been manufactured during 1942 to replace the A-3, and subsequently being supplanted by the improved Fw-190A-5. Constantly upgraded during the war, the type held on until the final days, both as a fighter and as a ground support and reconnaissance aircraft. Most serious modelers are familiar with the type and its history, so I’ll refer you to other sources. There is certainly no lack of information on this aircraft, both in publication form and on the internet.

Strangely, before now, the best way to obtain a decent 1/72 scale model of the Fw-190A-4 variant, aside from trying to correct all the errors in the old Revell kit from the sixties or doing an old Matchbox kit, was to obtain a Tamiya Fw-190A-3 and modify the fin and rudder, trimming the flush mounting antenna post and adding the small triangular post used to mount the low frequency wire antenna. Other changes, such as cowling flaps, were minor corrections. A few years back, Admiral, a Czech firm, produced an Fw-190A-4, but there were serious outline problems (although the decals were excellent). Now, Zvezda has chosen to get into the market with a simplified but still very good kit of the “dash-four”.

This kit is intended as a snap-together kit, and consists of about 35 crisply molded light grey plastic parts, including a one piece canopy and decals for two aircraft, an Fw-190A-4 of IV/JG 2, based in Tunisia in 1942, and an Fw-190A-4 of IV/JG 1, flown by Oblt. Gunther Witt, from Moenchengladback Airfield (probably Belgium or Holland) in the Autumn of 1942. I looked through my sources online and could not document any evidence of the existence of either aircraft. One site showed the wreckage of a similarly-marked Fw-190A with chevron and black circle marking, but also with the black “eagle” markings used to hide the black exhaust stains on the side of the fuselage, often seen on some JG 2, JG 3, and JG 26 aircraft. This aircraft, according to the site, was flown by Eberhard von Burath, and was w/n 145555. This pilot had seven victories over 4-engined bombers on the Western front. The European JG1 aircraft had a 74/75/76 color scheme with typical markings, while the Tunisian JG 2 aircraft is depicted as having a 74/75/76 basic scheme with dappled light grey over nearly all of the upper surfaces. I did some searching, and discovered that the same color scheme appears on a wargaming site, which led me to believe that it never was an actual aircraft, as there was no photograph provided. I don’t know why Zvezda didn’t provide colors and markings for some of the colorful and more commonly known Fw-190A-4’s, such as operated by JG 54 and some of the other units who made the type famous. So, as far as decals go, you’re pretty much on your own. I did the JG 1 aircraft, and it does look very good, although I can’t vouch for its authenticity. Maybe I just don’t have the right reference material.

The kit instructions include four pages of drawings, including 10 assembly diagrams, a color guide with Humbrol numbers and names (but no Luftwaffe RLM numbers), and a decal sheet. The decals were pretty complete, with lots of maintenance markings, but a few of the black and white decals were off-register. The color scheme information is adequate but not really great.

This kit is designed to snap together, and it does essentially that. Molding is basically accurate, and fit is very tight. One problem is that the trailing edge of the wing at the ailerons seems to follow the position of the trim tab, rather than allowing the trim tab to stick out as it does on the real airplane. Other kit makers have also made this error. This is easily trimmed off. There is little cockpit detail, although there is an ingenious casting if you wish to include a pilot in the seat. The individual seat is good, and there are two instrument panels, one with instruments molded in, and the other with flat surfaces for the instrument panel decals. A small stick mounts on the floor bard, and there are rudder pedals under the panel where they can’t be seen. There is no bracing strut for the cockpit headrest armor, and no gun sight, but these are easily made from scrap. The parts fit together very easily, and very little filler is needed, except for the place where the lower wing leading section meets the front lower cowling, where there is a little step. Other parts snap into place, and not much glue is needed to keep them in place. Panel lines are finely done, and the overall effect is very good and realistic. The engine cowling is done ingeniously, with the front cowling section snapping onto the forward cowling, while the fan unit, prop, and a washer complete the assembly. The spinner then snaps into place, so the nose of the plane can be painted before the prop is installed. The wheel wells are nicely detailed, but require extensive masking before painting; however, this masking problem is solved by the spare landing gear doors and covers provided in case you want to build the model gear-up. Just snap the unit into place, paint the model, and then pop the unit loose and install the landing gear. The center doors snap securely into place, but there is no provision for the ETC-501 ventral bomb rack which was carried by many of these planes. The doors were removed when the bomb rack was installed; so to do the jabo version, a trip to the spares box will be necessary. The canopy snaps easily into place, and quite a bit of detail can be seen through it.

As previously described, the paint schemes provided with the kit are questionable, but I decided to do the JG 1 aircraft anyway. The topside colors of 74 and 75 were applied and masked, and then the 76 underside color was applied. A coat of Glosscote prepared the surface, and the decals were then applied. They went on easily, although I would suggest trimming the crosses, as the clear film along the edges tends to remain visible on the painted surfaces, even with generous coats of finishing coat material. Or, you could use aftermarket crosses and swastikas, as plenty of these are available. The completed model, however, is totally acceptable in my view. I shall get more of them as time permits.

I would highly recommend this kit to even inexperienced modelers, although highly experienced model builders will still be impressed with it. It is only a little more complicated that a Hobby Boss kit, and certainly much higher in quality. It fills a gap in the Fw-190 series of kits available in the only true scale, and numerous variations could be built from it. I think the kit will be a good seller, and I am very impressed with it, especially since I have probably built the vast majority of Fw-190 kits issued in 1/72 scale over the years.

Thanks to Dragon Models USA and IMPS/USA for the review kit.

Paint and marking guide with decals