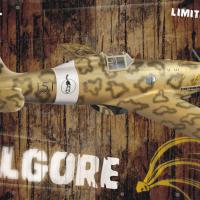 Eduard has released a boxing of the very good 1/48 Hasegawa Mc. 202, which is enhanced by the addition of two photo-etch frets (one pre-painted), resin parts and a paint mask. Not only that, but you get Cartograf-printed decals with markings for 6 colorful Folgores. It is an amazing offering.

Like most airplane model construction starts with the cockpit and with two photoetch-frets it means you are going to have quite the detailed “front office”. Some plastic parts need to be modified, removed or replaced, including parts of the cockpit floor, cockpit sides and instrument panel.

Other than the above-mentioned problem, all that PE works in your favor, adding lots of detail and not giving you any trouble. In particular the instrument panel is gorgeous and while it seems complex to assemble, it was not. The seat harness PE might look a bit confusing, mainly because –to the best of my understanding- the cushion goes on the seat backrest, not in the seat pan.

Based on the markings you choose you will need to assemble the early or late air intake (resin part) and choose the horizontal stabilizer size appropriate to that variant. A note on the resin air intakes: both early and late versions have been cast with the air intake opening in the “closed” position. This means they are relatively shallow in their openings.

While air intakes with deep openings (ie “open” position) tend to be more impressive, most Folgores had their air intakes in the “closed” position while on the ground. Typically the intake will be closed after landing and remain closed until time to take off. After all, you don’t want to have dust and debris to get in the intake.

At this point, I prepared the model for painting (did some very minor seam sanding) and I painted the lower grey/upper sand, making sure to wrap around the wing leading edges. I also choose to paint the fuselage white band.

The smoke rings were Tauro smoke-ring decals (not included in kit), on top of a coat of Future. Once the smoke ring decals were in place, I applied another layer of Future and I applied the Cartograf-printed decals. They worked great. Thin, good color density, perfect register and the conformed to all shapes and recessed panel lines.

After the third coat of Future, I applied a wash to all panel lines using Tamiya Panel Line Accent Brown (enamel wash), which I liked as it gave the model a bit of a “sand and dust” finish.

Installing the aerials (made out of E-Z line) and a flat coat rounded and finished the model.

I spent about 50 hours working in this model, more than I normally spend in a single engine airplane (I’m normally in the 25 hours range). Considering all the photoetch parts, resin and smoke-ring decals I’m not surprised I needed more time.

Even with the increase in total time, I never lost interest in this model but I admit, I was also building an Eduard Weekend F6F-5 along the way to have a few “easy” modeling evenings here and there...

Considering all the photoetch and resin in this model I will highly recommend this kit to the experienced modeler (not that I think of myself as one, however, I was able to pull it off). This model pushed my modeling envelope –due to all the detail- and I feel very happy with the way this model turned out.

I would like to thank Eduard Models and IPMS/USA for the review sample.​

Sidewall with wheel of cockpit

finished model of Folgore
Previous Next